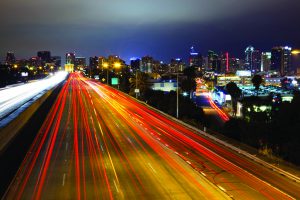 After a meeting in San Francisco, the California Transportation Commission (CTC) allocated more than $300 million last week for projects to improve the Interstate 5 North Coast Corridor (I-5 NCC) and design work for the future Otay Mesa East Border Crossing.

The I-5 NCC allocation will pay for a comprehensive set of improvements designed to provide congestion relief and improve coastal access in and along this critical coastal corridor.

The HOV lanes are used by multiple occupant vehicles, buses, motorcycles, and permitted clean air vehicles. It also includes a new bike route that will connect the San Elijo and Batiquitos lagoons, improving access to the coast and encouraging active transportation.

The I-5 NCC allocation also includes a park and ride/multi-use facility with electric vehicle charging stations and additional parking spaces for commuters at Manchester Avenue and I-5.

Operational improvements to eliminate bottlenecks, improve commuter information, and better integrate operations, including: acceleration and deceleration lanes to improve the flow of local traffic entering and leaving the freeway, are also included, as well as intersection improvements and signal upgrades, and infrastructure to support future intelligent transportation technology upgrades.

“The improvements to the I-5 corridor are a critical part of a 40-year vision,” said SANDAG Chair and Del Mar City Councilmember Terry Sinnott. “The Build NCC projects bring local, state, and federal agencies together with the mission to provide communities with a sustainable and integrated transportation system that will continue to serve our region for generations.”

Funding for I-5 North Coast Corridor improvements is made possible by Senate Bill 1 (SB 1), also known as the Road Repair and Accountability Act, which increased the state gas tax to fund state transportation projects. More than $202 million of SB 1 funding will be matched with more than $97 million in federal funds.

“The most recent California Transportation Commission allocation of (SB 1) funds will help reduce the backlog of freeway maintenance to improve roads and transportation infrastructure throughout the region,” said Caltrans District 11 Director Cory Binns. “Funding also will advance projects that facilitate movement of trade across the International Border and increase capacity along I-5 with the Build NCC projects.”

Build NCC is a collaborative effort between SANDAG, Caltrans, and U.S. Department of Transportation. The first phase of construction is in the cities of Solana Beach, Encinitas, and Carlsbad as part of the 27-mile North Coast Corridor Program in San Diego County.

According to SANDAG, trade movement will be improved with two border-related projects in South County that were allotted $8.7 million for design.

State Route 11 (SR 11) will receive $4.81 million to design the Siempre Viva Interchange, the most southern interchange for passenger vehicles and trucks approaching the U.S. Mexico Border at the new Otay Mesa East Port of Entry.

The Otay Mesa East Port of Entry project was allocated $3.9 million for site preparation design. This work is a critical phase before construction begins. Work will include plans for utilities, drainage, and site elevations.