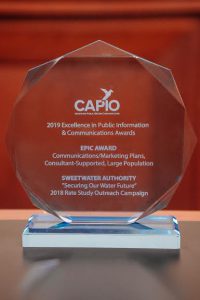 The Sweetwater Authority Governing Board recently received two separate awards for its efforts to engage and inform customers and other stakeholders on rate changes and for its Comprehensive Annual Financial Report (CAFR).

At the California Association of Public Information Officials (CAPIO) APIO Annual Conference earlier this month, Sweetwater Authority was presented with the organization’s award for Excellence in Public Information and Communications (EPIC).

The Authority received the EPIC award in the category of Consultant-Supported Communications or Marketing Plans/Campaigns for its strategic and comprehensive outreach campaign on the 2018 five-year Securing Our Water Future rate study. Through this outreach campaign, Sweetwater Authority’s customers and stakeholders were able to learn about the rate study process and how water rates are used to invest in infrastructure that secures water reliability for customers both now and in the future.

The Sweetwater Authority also recently received the Certificate of Achievement for Excellence in Financial Reporting by the Government Finance Officers Association of the United States and Canada (GFOA). The Certificate of Achievement is the highest form of recognition in the area of government and financial reporting for a government agency and its management. This is the Authority’s second time receiving this prestigious honor.

Sweetwater Authority was specifically recognized for demonstrating a constructive “spirit of full disclosure” to clearly communicate the Authority’s financial story to stakeholders through its Comprehensive Annual Financial Report.

“Winning this prestigious award from GFOA for the second time is great tribute to our commitment to transparency and fiscal responsibility for our ratepayers,” said Steve Castaneda, Chair of the Sweetwater Authority Governing Board.

Sweetwater Authority, a joint powers public agency, provides public water service to approximately 190,000 people residing in National City and the South Bay Irrigation District, which includes portions of Chula Vista and most of the unincorporated community of Bonita.