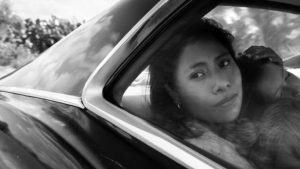 “Roma,” the highly acclaimed film from Mexico, will make its official San Diego debut at the Digital Gym Cinema in North Park next week.

The film is an intimate portrait of a Mexican middle-class family and their nanny, set against Mexico’s political turmoil of the 1970s. It’s named after a popular neighborhood in Mexico City, Colonia Roma, and is also a story about Mexican film icon, Alfonso Cuarón’s childhood.

It was written, directed and filmed by Cuarón himself. The Mexican film director, screenwriter, producer, and editor, who is also known for a number of film projects including his dramas “Y Tu Mamá También,” “A Little Princess,” the fantasy film “Harry Potter and the Prisoner of Azkaban,” and the science fiction thrillers, “Children of Men” and “Gravity,” which won seven Oscars, including best director at the 86th Academy Awards.

San Diego’s Digital Gym Cinema was chosen to screen the film after a number of San Diego theaters vied to host the premiere.

Moisés Esparza, the programming manager at the Digital Gym Cinema, addressed acquiring the film and its significance, “It is an honor to have the opportunity to exhibit Roma at the Digital Gym Cinema, presented by the San Diego Latino Film Festival. The film, a work of art that has to be seen on the big screen, is a celebration of Mexican culture and a tribute to all empowered women who do everything possible to support themselves and their families.”

The film stars Yalitza Aparicio, a 24-year-old primary school teacher who had never acted before the film, and who wasn’t looking to be in a film. The Guardian, a British daily newspaper recently reported Aparicio was encouraged to audition by her sister, who was unable to because she was pregnant. Aparicio plays Cleo, the family’s live-in housekeeper and nanny, an indigenous Mexican woman. It took time to find Aparicio, who is also the film’s protagonist. Several castings were made in Mexico City, Oaxaca, Veracruz, and finally in Tlaxiaco, Oaxaca, before casting Aparicio.

When asked by the Guardian how Aparicio felt about getting the part, she replied, “I was happy, but nervous because I had no idea whether I’d be able to achieve what I’d been asked to do by Alfonso.”

Aparicio was also asked by the Guardian if she considers herself an actor first or a teacher, to which she responded, “As a teacher you set an example, you become a role model, and this experience of being in the film has made people in my community look at me as a possibility that their dreams could come true.”

Considered an early best picture contender, it was chosen by Time Magazine as the best film of the year, and also by the New York Film Critics Circle which also named Cuarón best director.

Deadline Hollywood, an online entertainment and media news magazine, recently reported on a lecture Cuarón participated in with the British Academy of Film and Television Arts (BAFTA) Screenwriters Lecture in London where he discussed a number of subjects including the film.

During the BAFTA lecture, Cuarón said he wrote the script in three weeks, “I finished the screenplay and I never read it again and nobody ever read that screenplay. Not actors, not the crew. Nobody read the screenplay. The only person who had, the only one was my partner David Linde from Participant. He said, ‘well I need the screenplay just because of insurance, otherwise I cannot pay the money.’” The film is a partnership with online streaming film and television company Netflix, which also plans to show the film.

Deadline Hollywood also reported in spite of the partnership with Netflix, Cuarón is also encouraging audiences to see “Roma” on the big screen.

Esparza also addressed the film’s main theme, a tribute to one of the women who raised Cuarón and to domestic workers.

“Roma is a rather amazing technical feat, but perhaps the most impressive aspect of the film is that it gives light to the perspectives of domestic workers. Many times they exist in marginalized spaces. I hope to see them in the cinema!” he said.