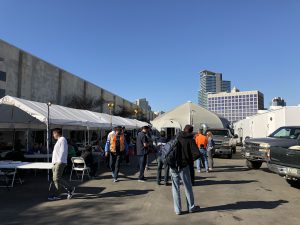 Following the evacuation of a bridge shelter during recent flooding, more than 300 homeless individuals returned to the reopened shelter at 16th Street and Newton Avenue managed by the homeless reach nonprofit Alpha Project, on Saturday, Dec. 8.

The homeless individuals staying at the Alpha Project site were temporarily housed at SDCCU stadium for 9 days after the facilities in the East Village were flooded on Thursday, Dec. 6.

“We had the apocalyptic-once in a 100 years-flood, it caught us over here. We had about four feet of water come in here, and it was toxic because of the street run-off and diesel, and because we had some portable toilettes,” said Alpha Project CEO Bob McElroy to La Prensa San Diego. “We were at the SDCCU stadium for over a week while the City disinfected the entire facility and belongings, and we also lost a lot of our belongings but the generosity of the community has replaced a lot of that.”

The transitional shelter location has been there for over a year, with no other similar situation like the flood from Dec. 6, and the same location served as a winter shelter for homeless people for the last 12 years, also with no flood problem like the one from Dec. 6.

City crews worked night and day to clean and repair the shelter that flooded the shelter due to unusually heavy rains. Restrooms, showers and mattresses in the bridge shelter have all been fixed or replaced. And all the services were available again at the site by Monday, Dec. 17.

“It was heartening to see, everybody really dropped everything they were doing the night it rain so hard to really help people get out of the floods and get into safety at the SDCCU stadium,” said San Diego Mayor Kevin L. Faulconer to La Prensa San Diego.

“To see the turnaround in just one week, it brings a smile to my face. A lot of people have been working 24/7 to get this back open, not only the city crews and Alpha Project but also great community organizations like Salvation Army, Red Cross, and the Lucky Duck Foundation. This city came together and it showed.”

Generous donations from San Diegans helped replace many of the personal belongings that were destroyed during the flooding. San Diegans were asked to help by donating blankets, clothes, bottle water and other items, and the donations rolled in at the SDCCU stadium at a bump-to-bump basis.

“From MTS next door, that helped with the buses to get people over at the SDCCU stadium, to the community that helped with donations-people lost some of their stuff here- and to see all the donations of clothes, and so many things, it really exceeded expectations,” Faulconer said. “It was really San Diego at its best.”