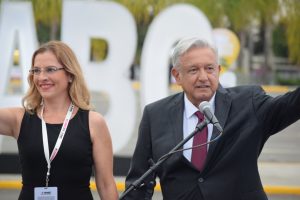 A new ruling party will govern in Mexico after Mexicans voted for a new president, Congress representatives and nine governors on Sunday, July 1, where a left-wing party coalition won with a landslide victory.

“The election was overwhelming, Andres Manuel Lopez Obrador, a left-wing candidate, won the election with over 50 percent of the votes cast between four candidates. His party also won the majority seats in Congress and almost all of the governorships in Mexico. Lopez Obrador not only won in a part of the country, but he won in almost all the country which is very impressive,” said Andrew Selee, president of the Migration Policy Institute and former executive vice president of the Woodrow Wilson Center, to La Prensa San Diego. “This is the first time in a democratic process where a candidate won by over 50 percent of the votes in a forceful way.”

According to the most recent data by the Preliminary Electoral Results Program (PREP), Lopez Obrador, the candidate for the Together we will Make History Coalition, received 24,273,379 votes or 54.43 percent of the votes. Ricardo Anaya of the Mexico in Front Coalition, conformed by the National Action Party (PAN) and the Party of the Democratic Revolution (PRD) candidate, got second place with 10,348,986 votes or 23.21 percent. The ruling party candidate, Jose Antonio Meade, received 7,558,488 votes or 16.95 percent. The last place was for independent candidate Jaime Rodriguez Calderon who got 2,347,787 votes or 5.26 percent.

“There are Mexicans who are not satisfied with Lopez Obrador’s victory but he won by 30 more points than his closest opponent so his victory is unquestionable,” Selee said. “We are in a time of change, there is a new group of politicians filling government seats that are very different from the current and previous officials.”

The relationship between the U.S. and Mexico is expected to continue with the election of Andres Manuel Lopez Obrador, but not the same type as before.

“In his victory statement, Lopez Obrador recognized the importance of the United States for Mexico, and he is going to have a practical approach even less active and even have a less central-guided government compared to former presidents,” Selee said. “Lopez Obrador is not going to force a relationship with the U.S. and if the relationship doesn’t flow, it’s more likely that he is not going to pay a lot of attention to this country, and that is a big change.”

On Election Day in Mexico, there was a lot of participation in every place of the country were polls had long lines all day since very early in the morning. Some cities had incidents at poll sites that included long lines of over five hours to vote. Some reported that they were not listed to vote at their assigned polling site and there was even violence between citizens at a number of polling stations.