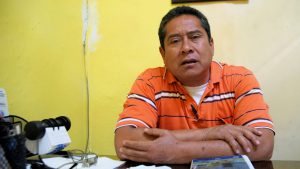 Nelly C believes that the United States government is making it near impossible for migrants to seek asylum.

“If it is true that we are going to be charged a fee in order to request asylum, I don’t think anyone will have the money to pay it. If we all left what little we had behind and fled not just from violence, but also from poverty, how could we afford to pay?” said the single mother who journeyed to Tijuana with her two children.

President Trump is proposing, beginning in late July, for the government to charge migrants an as-of-yet-undisclosed filing fee to petition for asylum.

“That’s in less than three months, and right now my wait to be able to enter and ask for asylum is four months; that means I would have to pat, and I don’t have any money,” said Nelly.

While living in Tegucigalpa, Honduras, she worked and helped her parents with household expenses, but she never earned enough to move out with her children.

“We are at a shelter obviously because we don’t have money; here they help keep us out of the streets, to have something to eat,” she added.

This Tuesday, staff from the Guatemalan Consulate in Tijuana met with a group of Guatemalan migrants who, discouraged by the long waits to have their case heard, decided to return home instead and needed financial help for their fare back and for food.

“They brought them from Mexicali two weeks ago, telling them that they could only petition for asylum through Tijuana. But now they were told that they’d have to wait for 4 months or longer for their initial appointment, and that they might have to pay a fee,” said Pastor Albert Rivera.

At the Juventud 2000 shelter, where Nelly is staying, shelter manager Jose Maria Garcia Lara feels that the Trump Administration is making it impossible for migrants to request asylum.

“This idea of charging people who do not have anything a fee to file their petition is a new thing. Add to that that they’ve said that those immigrants who get past the credible/provable fear interviews would then have to pay a bond and would not be authorized to work until their cases are finalized,” said Lara.

According to President Trump, asylum cases could be decided in 180 days, but these migrant families would not be authorized to work in the meantime, leaving them with only the choice to depend on charity or go back and wait in their home countries, where they’d face enormous risks.

Al Otro Lado, a non-profit that provides legal aid to migrants directed by attorney Nicole Ramos, received some funding from Governor Gavin Newsom after he learned that the organization defended hundreds of migrants free of charge.

Ramos says she hopes the courts can block the charging of these bonds because it would be impossible for migrants to afford it, “charging them for their asylum is illegal and immoral.”

These migrants lack even the most basic necessities; they are fleeing from violence, one that has also left them impoverished.

To charge them now “is just another attempt by the Trump Administration to repress the rights of the most vulnerable amongst us; basically forcing refugees to end up in coffins before they ever get a fair chance to present their petitions, sentencing them to death because they cannot afford to pay the fee that would save their lives.”