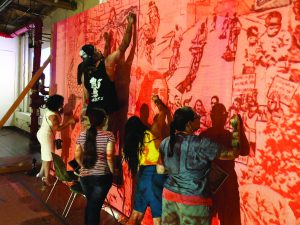 Chicano Park will soon boast a new mural, but this time, the artists include Barrio Logan residents.

The goal of the mural, titled “Hawkaa” – an indigenous Kumeyaay greeting – is to give the community a voice so they can tell their own story, as well as a reminder as to why it is crucial to protect our environment.

Renowned Honduran muralist Alicia M. Siu designed the mural, which was approved by both the Chicano Park Steering Committee and the Environmental Health Coalition (EHC). The concept came out of a series of community workshops in which they brainstormed ideas for the mural.

Essentially, the mural will depict Barrio Logan community members and their struggle to preserve their environment against the latent threat posed by pollution in the surrounding areas, together with a portrait of generations of the Kumeyaay people, native to both San Diego and Northern Baja.

“A big part of the mural is to highlight what the community and environmental advocates have achieved,” said Siu. “It is also about showing the vision of the community’s youth; how they see their community and what they see as solutions for addressing air pollution and the health of their own bodies.”

To outline the mural, the design was projected onto a blank wall, and it was the residents themselves who drew the initial lines for the Chicano Park Herb Garden masterpiece.

“It was planned this way, for the people to help paint it, whether they can draw or not. That is what makes this fun, to see how it turns out,” added Siu. “I am anxious to see the impact it could have once it is finished.

The chosen theme was applauded by Environmental Health Coalition advocates, who have fought for environmental justice for over 20 years.

Surrounded by shipyards, the Port, Interstate 5, and a Navy Base, Barrio Logan has been impacted by pollution for decades. As a result, the community has the highest asthma rates in all of San Diego.

“The mural tries to tell today’s story and find solutions,” shared EHC community organizer Jorge Gonzalez. The mural, he said, shows the different community perspectives, both past and present. “There is a lack of continuity from one generation to the next, between the young and the old, not enough dialogue. So, this mural is creating a dialogue, a healthy space for discussion,” said Jorge. “We want to know what the new generations think about the issue; what solutions they have, too. We want to create a platform, and a mural is one way of doing so.”