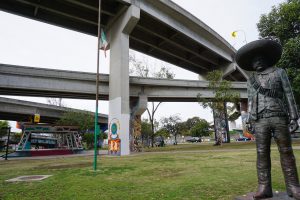 Little by little, Noe Vidaña and other lifelong Barrio Logan residents have been cleaning up the DIY landscaping at Chicano Park’s cactus garden so everything looks its best come the annual Chicano Park Day celebration, to be held this year on Saturday, April 20.

He points to some boundary stones, colored in green, white, and red, he has washed and primed. “Yeah we’re getting them clean and putting on a nice, fresh coat of paint on them. We’re actually giving fresh coats of paint to anything that needs touching up like the picnic tables and other things.”

These neighbors have been making these small but noticeable improvements ahead of Chicano Park Day, a commemoration of the day Logan Heights residents took back a plot of land where a park was to be built after work on a Highway Patrol substation began instead. The yearly event is celebrated on the Saturday closest to April 22, date in which the community took over the site in 1970. This year the celebration will be held on April 20.

Vidaña has celebrated Chicano Park Day for as long as he can remember and is always excited for the festivities. In addition to touching up paint jobs, he spent Tuesday afternoon plucking out weeds from in between the garden’s cacti and will keep working on a large carving made from a tree trunk currently laying at the Chicano Park handball courts.

A few yards down, four older men also clear weeds and pick up litter on the grove’s dirt paths. Vidaña says these señores were present at the park takeover with picks and shovels.

“They’re OGs and they’re here a lot so they clean up and keep people in check when they don’t pick up after themselves,” Vidaña explains. “Chicano Park is everyone’s park, but we grew up here and want people to respect this place.”

Other neighborhood residents and members of the Chicano Park Steering Committee, the autonomous volunteer organization which manages the park and its activities, will also make other improvements throughout the main park space in the remaining days leading up to the celebration.