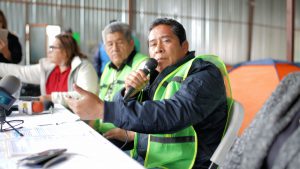 The federal budget passed last week shows zero pesos allocated to migrant support. The previous fiscal year, the budget was $300 million pesos (about $15 million dollars) to be split amongst all organizations, from the southern border with Guatemala all the way to the U.S. border.

“Considering that the $300 million [pesos] was already insufficient, that it barely helped, what will we be able to do now that there is a larger number of migrant caravans, deportees, and Mexican migrants who travel north with the intention of crossing to the U.S.? Plus, the wait to be allowed to cross seeking asylum, which now takes months,” said Sergio Tamai, of Ángeles Sin Fronteras (Angels Without Borders) in Mexicali.

Grassroots leaders still have no details regarding a possible agreement between the U.S. and Mexico that would have the thousands of asylum petitioners – regardless of nationality – wait in Mexico until their petition case is decided in the U.S.

“So far, we haven’t been told anything, and it shouldn’t be that way. Because, first, they did not consult us, and second, we are going to be the ones to face the issue of serving the growing migrant population without any money,” explained the director of the Juventud 2000 shelter, Jose Maria Garcia Lara.

Lourdes Lizardi, of Alianza Migrante (Migrant Alliance), told La Prensa San Diego that a new caravan is getting ready to leave Central America in mid-January. “They say that as many as 15,000 people could come. But, let’s assume that’s not the case and only a few thousand come, what will we do with empty hands to help all these people?” she asked.

Tamai warned that, should the incoming administration not correct the funding cut, “we will have to protest in a way that gets their attention like, for example, by blocking border crossings,” in Tijuana and Mexicali.

During his campaign, then-Candidate Lopez Obrador did not meet with Baja California grassroot leaders; however, several organizations as a coalition informed him that the $300-million-peso budget was not enough for all organizations throughout Mexico for a year, and submitted a petition asking for the budget to be increased to $1 billion pesos (approximately $50 million dollars).

Tamai also said that the decision to instead eliminate aid to migrant organizations goes against what they expected from a left-wing government in Mexico.

“For it to be a government with different intentions, that wants to help people, that’s all fine and good, but that does not mean that it is above making mistakes, and it is up to us to tell them that their decision is not the best for migrants,” added Tamai.

As of now, there are over 5,000 migrants in Tijuana. While the federal government serves close to 2,000 of them at the El Barretal shelter, the rest of the city’s shelters are overflowing with Mexican migrants seeking asylum, mostly from the states of Michoacan and Guerrero, and Central Americans who did not arrive with the caravan.