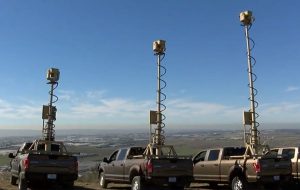 The San Diego Sector Border Patrol is now equipped with vehicle-mounted video cameras capable of surveillance up to six miles away, according to information provided by PureTech Systems, the high-tech company that designs the cameras.

A picture that accompanied the information shows three pickup trucks outfitted with the surveillance systems atop a hill in Otay Mesa, overlooking an industrial park in Tijuana far in the valley below.

The Arizona-based tech company stated that these mobile systems will enable Border Patrol to swiftly respond to emergency situations.

The Mobile Video Surveillance Systems (MVSS) consists of a three-camera array mounted on a telescoping mast which extends over 35 feet in the air. The mast is installed on the bed of a half-ton pickup truck, and each of the cameras has night vision and thermal capabilities.

The MVSS cameras are controlled through a software system with a user interface display installed on each of these vehicles.

PureTech also furthered that the Mobile Video Surveillance Systems will not replace a wall, such as the one President Donald Trump is intent on building along the border with Mexico, but instead will go hand-in-hand with it.

After deploying the systems in California – in the San Diego Sector and tentatively in El Centro – the company will also be delivering them to the Texas Border Patrol.

Border Patrol has had video systems with long-range surveillance capabilities since over a decade ago; however, these were fixed, not mobile, towers installed a few feet away from the international border. These systems, and the sensors along the border, have been under National Guard supervision since President Trump ordered their deployment in Spring of 2018 in anticipation of the arrival of the migrant caravan in late April of that year.

Thus far, Border agencies have not informed of any significant arrests attributed to the new MVSS equipment. Further, the equipment can do little to detect cross-border tunnels.

Also last week, a group of more than 370 immigrants, most of them families and unaccompanied minors, crossed into Yuma through a hole dug under the metal border fence. Videos and images of this mass incursion were captured by one of the fixed towers equipped with night vision and thermal cameras.