Border Patrol Stop Car on Southbound I-15 and Find Cash

A car that Border Patrol agents thought looked “suspicious” turned out be loaded with nearly a million in cash.

The Volkswagen Touareg was stopped Wednesday morning as it headed south on Interstate 15 just north of Escondido. A police dog alerted officers to contraband and their search of the car yielded bundles of cash hidden in the fuel tank. A total of $967,460 was discovered in 65 bundles wrapped in plastic. 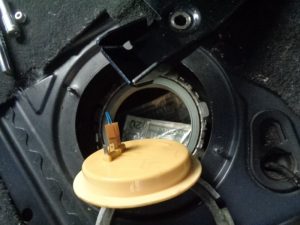 The driver, a 26 year-old Mexican national, was questioned and arrested by Homeland Security officers. Border Patrol agents seized the car and the money.

Border Patrol did not releases the name of the driver.

Several vehicles loaded with cash have been discovered along the freeways leading south toward Mexico in recent years. Law enforcement agencies suspect the cash represent proceeds from the drug trade that is being moved south to Mexico and South America to drug cartels.