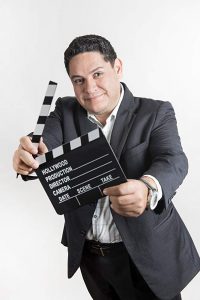 Tijuana filmmaker Gabriel Reyes was invited to participate in the 72nd edition of the Cannes Film Festival, the most important in the world, where he will deliver the conference: Mexico: Innovation and opportunities in cinema. He will also present his book, “How to Revolutionize the Film Industry and Not Die Trying”, as well as the short film in virtual reality “Siendo un muerto” (“Being a Dead Man”).

“It’s a great deal of excitement, but also a great responsibility. Hopefully I can do a little bit to improve this wonderful industry”, Reyes told La Prensa San Diego.

This is not the first time he has participated in Cannes, in 2014 his short film “Papalótl: La Travesía” (“Papalótl: The Journey”) was selected for the Short Film Corner event. On this instance he considers that his participation will have an important impact in the film industry.

“At the conference, I strictly lay out film engineering and how to improve it to reduce time and costs and increase quality. The average process to produce a good film or series is from one to four years, we want to reduce it immediately to three good quality films per year, at least”, said Reyes.

He acknowledged that it is an enormous challenge, and that many people do not think it is possible, but in the conference he intends to prove otherwise. He also proposes to reintegrate cinema with empirical and transmedia experiences, such as virtual reality, and even culinary art.

“Can you imagine trading popcorn for a five-course dinner, with food linked to what you see on screen? It would be wonderful”, Reyes stated.

As the film industry becomes modernized, the resources could be concentrated in what he calls the creative core: writers, directors, actors, production designers and cinematographers.

The participation of Reyes continues with the screening of the short film “Siendo un Muerto” in 16: 9 format, recorded with Imax standards and, simultaneously, producing a virtual reality experience.

“Siendo un muerto”, deals with the recurring themes of the border: it has to do with traditions regarding death in Mexico, but also about the conditions that lead to the deaths of migrants and victims of drug trafficking.

“The most shocking thing is that the spectator is right in the middle of the action”, said Reyes. “There is a scene recorded with drone in 360 degrees and in virtual reality, something that has never been seen. It’s about literally putting you in the middle of the idiosyncrasies related to the death of a Mexican, and particularly of the border”, he concluded .

He will also present a case study as a company: EDigital films, which he directs since 2014 in Tijuana, participating in such important productions as Fear the Walking Dead in which he worked for two years. “It was a mastery of production, a series where all the techniques were used like SFX, VFX, and the challenge of creating fifteen episodes of cinematographic quality for one of the most successful series in the history of television”, said Reyes.

One of the missions of Cannes is to find the talents of the future, and in its 72nd edition, has Alejandro González Iñárritu as president of the official jury, a fact that enthuses Reyes, who considers the three great pioneers, González Iñárritu, Alfonso Cuarón and Guillermo del Toro, centerpieces of the Mexican film movement.

“They are the ones who carry the machete and have already created the path for the rest of us, because Mexico is already the number one brand country of cinema in the world. In its time it was Italy with Fellini leading the way, then Spain with Almodóvar, and now it’s Mexico with González Iñárritu, Cuarón and del Toro, and we should not miss that opportunity”, he concluded.

The prestigious contest on the French Riviera takes place from May 14 to 25. Gabriel Reyes will be presented on May 16, and multiple projects await his return, such as the post production of his first fiction feature film “Roma en el desierto” (“Rome in the Desert”), a play written by Daniel Serrano that will be adapted to film. As well as Don Miguel Ruiz’s series called Memorama.

“We plan to record in a groundbreaking way in June. We also have some plays planned to transform into high-quality cinematic content”, concluded Reyes.

These are some of the plans that must be paused until his return from Cannes; the festival that has given a special place to Mexicans in its 72nd edition and that places special emphasis on the importance of Latin American cinema in the world scene, honoring renowned directors, but also giving opportunities to future talent.