A Budget for the People 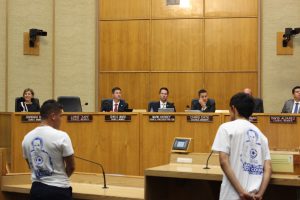 The needs of underserved communities are at the center of changes a group of community organizations wants to see made in the upcoming City of San Diego budget.

The Community Budget Alliance (CBA), which champions budget equity to benefit low-wage working people and underserved communities, is pushing for the changes.

Among the top priorities the group would like to see in the upcoming City budget is funding for restorative justice training for police officers.

The CBA is asking the City’s police department to follow a training model used by the San Diego Unified School District.

“The restorative justice training of the San Diego Unified School District’s Police Department has proven to be a success over traditional punitive measures,” Jessica Cordova, a member of the CBA explained.

The hope is to redirect youth who could otherwise be rehabilitated at an early stage and prevent them from early exposure to the traditional criminal justice system that can be highly detrimental for young people, and especially young people of color.

The group is asking for $300,000 to train Mid-City police officers, and for them to develop their own internal training model.

More than two years has passed since San Diegans voted to increase the City’s minimum wage, but many residents still remain uninformed about the changes, and the CBA wants to change that.

To help workers, the coalition wants the City to set aside funds to partner with community organizations to do outreach about the City’s minimum wage and sick leave laws, and for residents to also learn where they can go to get help filing complaints and request investigations about missing wages.

The group also wants to help immigrant workers and non-English speaking workers, whom they believe are disproportionately overrepresented in low-wage jobs where wage theft is more prevalent.

Community planning group meetings offer citizens in the region the chance to get involved in with projects and decisions affecting their communities, but for some people language barriers can make it difficult for some people to participate.

Dozens of different languages are spoken in San Diego, from Spanish, Tagalog, to Arabic and African languages, but translation services are not provided at the meetings.

The idea for the translation services came from the Environmental Health Coalition, who would like to see the meetings become more accessible in the hopes more people can have their voices heard and participate in decisions affecting the communities they live in.

The City of San Diego’s 2014 Citywide Pedestrian Collision analysis found that people in economically disadvantaged neighborhoods are 10 times more likely to be hit by cars while walking than people in other neighborhoods.

Residents in those neighborhoods rely on public transportation and walking, and for that reason the CBA also wants the City to place a higher priority on the traffic and pedestrian needs in these neighborhoods to help cut down on the risk of accidents and fatalities.

The group is also pushing for upgrades to Emerald Hills Community Park.

The changes have been long-awaited by the residents, the Emerald Hills Community Town Council, and its current president, Evelyn Smith.

The park still has the same playground equipment placed there when the park was first constructed fifty years ago, leaving children no choice but to use rusty, deteriorated equipment.

The CBA has already had a lot of success in securing funding for a number of other projects this year and wants to make sure those stay in the budget.

The San Diego City Council is scheduled to discuss potential budget revisions at a meeting on June 11, for the fiscal year that starts July 1, 2018.
City Hall is located at 202 C Street in downtown, San Diego and council meetings are held on the 12th floor. The meeting is open to the public and begins at 2 p.m.