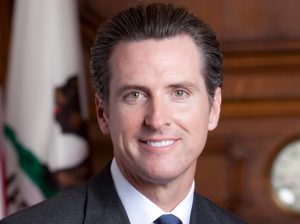 “Let’s start with the fear mongering from the White House about the so-called ‘emergency’ at our border,” Newsom said as he began his remarks.

The new governor said President Trump’s stances on immigration were an echo from 15 years ago when he was the new mayor of San Francisco, and former President George W. Bush said during his State of the Union speech that LGBT Americans should not be able to get married. Newsom said he believed the remarks were an attack on friends and neighbors, and California’s values.

“Last week we heard another president stand up at the State of the Union and offer a vision of America fundamentally at odds with California values. He described a country where inequality didn’t seem to be a problem, where climate change didn’t exist, and where the greatest threat we face comes from families seeking asylum at the border,” Newsom said.

The Democratic governor’s comments also come in a pivotal week for Congress as Republican and Democratic lawmakers work for a new deal to avoid another government shutdown.

“Let us state the facts,” Newsom added. “We are currently experiencing the lowest crossings since 1971. In California, like the nation, our undocumented population is at the lowest level in more than a decade, some 550,000 fewer in our state alone. Immigrants both here legally and those without documentation commit crime at a lower rate than native-born citizens, and those families, women and children, seeking asylum at our borders are doing so lawfully.”

“This border emergency is nothing more than a manufactured crisis, and California will not be a part of this political theater,” Newsom also said, and he continued, “No more division, no more xenophobia, and no more nativism. We suffered enough from that in the 1990’s with Proposition 187 and Proposition 227.”

Border security and immigration were just some of the different issues Newsom discussed during his speech.

With regard to education, the governor said the state is spending more on schools than ever before, spending $47.3 billion in California’s schools seven years ago, and with the support of the state legislature there could be more than $80 billion for next year, but added more needs to be done.

He also talked about the state’s homeless population, describing families, victims of rent spikes and others suffering from bipolar disorders, schizophrenia or paranoia on the streets, as well as recent outbreaks of hepatitis A in San Diego, syphilis in Sonoma, and typhus in Los Angeles. To address some of these issues, the governor proposed investing a half a billion dollars for “navigation centers,” or emergency shelters with services on site as well as creating a new commission.

Over the next decade, California’s statewide senior population will increase by four million. In 25 years, it will double. And more than half will require some form of long-term care, Newsom pointed out as the basis for a new Master Plan on Aging. Newsom also announced the appointment of former California first lady Maria Shriver to lead a new Alzheimer’s Prevention and Preparedness Task Force.

To address the lack of affordable housing in the state, Newsom said he he’s committed $750 million for a major new incentive package for communities to update their housing plans and revamp zoning for more housing.

The governor did bring up high rents in the state and the need for new rules to stabilize neighborhoods and prevent evictions.

Keeping healthcare affordable for Californians is also among the governor’s priorities. Newsom announced a $1 billion investment. He wants to make sure all state residents have health insurance, and to increase subsidies for middle class families.

Newsom also wants to expand Medi-Cal coverage to all Californians up to age 26, regardless of their immigration status.

He also wants to help families who can barely make ends meet by working with state lawmakers to provide a cost of living refund by expanding the earned income tax credit to a million more residents in the state.

The governor also said he wants Californians to make money from their data, and he will work to develop a proposal for what he referred to as a new data dividend for Californians.

Climate change, the criminal justice system, free community college, paid family leave, reforming the state tax code, and improvements at the DMV are other priorities Newsom said he will address in the coming months.