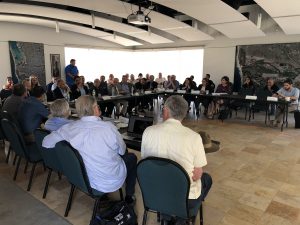 Leaders of both sides of the border gathered to discuss several environmental projects to create action that would help the environment in the Cali-Baja region.

One of the projects presented at the meeting was a new website that would give easy access to official data about the water quality in Tijuana and San Diego beaches.

“We are proposing a citizen watch project of the Tijuana River’s water. We as citizens need to know how is the quality of the Tijuana River water and the local beaches water. For that, we need to gather all public information available in one site,” said Hernando Duran, director of Tijuana Verde. “When someone needs information about the quality of water, they don’t know where to look, so we are going to gather all that information and we are going to display it in only one site, which is going to be the Tijuana Verde page through Tijuana Innovadora’s website.”

This project is expected to be completed in a 90 percent to next November, when the Crossborder Environmental Congress is held.

“We are seeing what type of crossborder projects we can create between Americans and Mexicans to help solve common issues,” Duran added.

Agora Verde is a monthly crossborder meeting held one time in San Diego, and the next in Tijuana, with the idea to gather community leaders and different organization leaders to help face the issues that have an impact in the border region.

“To find this type of meetings is a huge thing because we have citizen organizations of the Mexican side and the American side that are working together as a citizen watch to help coordinate government issues in both sides of the border, this is something really interesting and unprecedented,” said Ruffo Appel.