California Governor Unveils Budget with Provisions for a Potential Recession 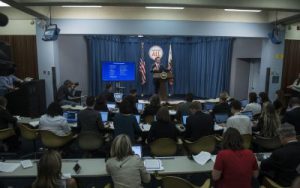 With a “better safe than sorry” lens, California Governor Gavin Newsom released a proposed $213.5 billion spending plan that includes preparation for a new economic downturn which could result in a $70-billion, three-year hit in revenues.

One item of note in the Democratic governor’s revised budget is that it retains funding to expand healthcare for undocumented immigrants up to age 26 – one of the first promises made as a governor – benefitting mostly the Differed Action for Childhood Arrivals (DACA) community living in California.

As housing availability and affordability has become a key issue for Californians, Newsom is proposing $1.75 billion investment to increase housing production throughout the state, and another $1 billion on homelessness.

The proposal also includes an additional $1.2 billion deposit into the state’s so-called “rainy-day fund”, bringing the reserve to $16.5 billion in fiscal year 2019-20.

In unprecedented fashion, Newsom stated that the state needs to prepare starting now for an economic recession he deemed “unavoidable.”

Recessions come in cycles, and according to the governor’s forecast, the looming recession could result in a $70 billion, 3-year loss in revenue.

The recession, said Newsom when asked about his economic forecast, will be “a recession that’s more modest than the mortgage crisis [that began in 2007], but a little more intense than the 2001 recession.”

“We’re already beginning to feel a little anxiety” about the economy, added the governor.

“The headwinds are real,” he said. “That’s why we are being thoughtful and judicious in terms of our budgeting and our planning strategies.”

The biggest investment in Newsom’s proposal would go to K-12 education, with over $81 billion.

Total funding for education, said the governor, would make up a record 45 percent of the state’s general fund.

Regarding the proposal to provide healthcare to young undocumented immigrants, the governor explained that this is a step toward his aim to make California the first state to provide truly universal healthcare.