California Governor Wants Healthcare for All, Including Undocumented Young Adults 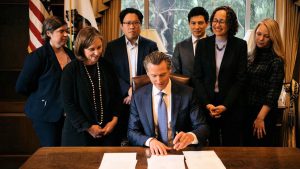 Any time his next-door neighbor crosses into Tijuana, Anibal seizes the opportunity to ask her to bring him medication that can be bought in Mexico without a prescription and that is allowed to be brought back into San Diego.

“I almost never get sick,” says the construction worker, who is originally from Oaxaca, Mexico, “once in a great while I may get a cold, or a stomach ache from eating too fast. Worst thing I’ve had to endure is a toothache.”

He keeps his medications in a plastic container with an airtight lid: a bandage, muscle-ache cream, ointment for cuts and bruises, oxygen peroxide. In a plastic bag inside the container, he keeps different teas as a natural cure for any ailments.

“What does worry me is if I ever need to get stitches, or have surgery, because I have no money to be buying antibiotics or anything like that,” he shared.

He says that a few months ago, he banged his thumb into a doorway while carrying furniture, and it swelled and turned dark purple. He went to a clinic, where they used a hot needle to puncture and drain the wound and gave him a prescription for antibiotics and pain medication – which he never bought because he did not have enough money for them.

“I just cleaned it with alcohol and wrapped it up, put it in kind of a splint, so I wouldn’t have to miss work.” If he misses work, his boss can’t work either.

Anibal is one of 138,000 undocumented 19+ year-old adults in California who could benefit from Governor Gavin Newsom’s decision to make California the first state in the U.S. to offer healthcare coverage for all its residents, regardless of immigration status.

Governor Newsom is now making good on his campaign promise to extend coverage for Medi-Cal beneficiaries by allowing young adults to remain on their parents’ plans until they are 26, and for everyone to have access to affordable care, regardless of immigration status.

The governor feels that, with more than 29 million residents, California is a market insurance companies will vie for by offering competitive coverage prices to whole communities.

“We will use our market power and our moral power to demand fairer prices for prescription drugs,” added the Governor.

Moving forward, programs that had negotiated pricing alone, such as healthcare services for low-income persons, senior care programs, and women and children’s services will come together so they can negotiate as a single market.

When asked why he is extending coverage to undocumented immigrants, Governor Newsom said that this will enable California to have a healthy workforce, and a community that contributes to the state’s economy.

At least one out of every ten workers in California is undocumented, and the state is home to at least one in four DACA recipients.

While other states already offer healthcare for all, California would be the first to offer coverage to literally all, including undocumented residents.

Governor Newsom’s plan will provide financial assistance to individuals earning up to $72,840, and families of four earning up to $150,600. It will also impose fine on those who fail to enroll in a healthcare program.