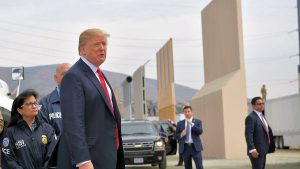 The California Legislature joins three other states in passing bills that would deny President Donald Trump access to their primary ballots unless he discloses his tax returns for recent years. About a dozen more state legislatures will be debating similar measures this week.

The majority of the California Senate voted in favor of a bill that requires presidential candidates to disclose the last five years of their tax returns. Although the bill makes no specific reference to the President, bill co-author Mike McGuire said “we believe that President Trump, if he truly doesn’t have anything to hide, should step up and release his tax returns” before running for reelection in 2020.

“Voters deserve to know, for example, if the President is putting America’s security at risk through his tangled web of business dealings with corporate interests and his dealings with foreign governments and foreign banks,” added McGuire.

The bill has now been sent to Governor Gavin Newsom’s desk, who could sign it into law. However, Newsom spokesman Jesse Melgar said the Governor would evaluate it on its own merits.

Former California Governor Jerry Brown vetoed a similar bill two years ago, but Newsom – even back when he was running – expressed an interest in Trump releasing his tax returns.

Although California has a large electoral weight on its own, should the other states follow suit it would be impossible for the President to run for reelection unless he releases his tax filings to the IRS.

Illinois, Washington and Nueva York have already passed similar measures, and at least 13 other states confirmed this week that they are preparing similar bills to bring to a vote.

At the federal level, House Financial Services Committee Chair Maxine Waters is insisting that the President disclose his tax returns for the past seven years, stating that Trump is the only president in American history that has refused to release his tax returns.

In response, Trump has threatened to sue two different banks if they agree to provide his tax return information.

The Financial Services Committee is pressuring Deutsche Bank and Capital One to turn over the President’s tax returns. Trump responded by threatening to sue the 2 banks if they agree to the Committee’s request.

The returns would inform how much Trump paid in taxes, how much he claimed in deductions, and the reasons why both the president – a real estate mogul – and the Trump Foundation have paid no taxes for several years.