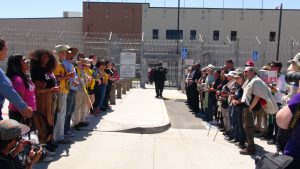 Outrage and heartbreak brought thousands of people together to downtown San Diego’s Civic Center Plaza last Saturday to participate in a march voicing opposition to the separation of children from their parents crossing the border.

Alexis Record, a resident from Linda Vista, was among them. Record said she went because she had an adopted son from a developing nation who was drugged at night and abused.

“The whole time I’m thinking what a terrible thing other countries do to these poor children, and I kind of saw myself as the better country that took care of him and could help love him better, and 20 minutes down the road, my own country was doing this to other children, creating the very thing we could judge others, we were doing ourselves, and it was ridiculous,” Record said.

Record said “zero tolerance” is reversible and it is discriminatory. You can’t eliminate racism from every official, but you can make policies that cut it down, she added.

Wendy Levy Batterson, with San Diego Indivisible and one of the main organizers of the march, told the group about men, women, grandparents, and babies she met at the San Ysidro Port of Entry who, she said, had their children ripped way.

“I started the Families Belong Together March because I was outraged that the people going for help to the San Ysidro Port of Entry to the United States had the door locked on them in the rain and cold weather by the Trump administration. They were left out on the curb with their families, including children, grandparents and even babies,” Levy Batterson said.

Pedro Rios, director of the American Friends Service Committee’s U.S./Mexico Border Program, began his remarks by asking protesters to chant, “No cages, no walls, safe communities for all.”

The march was lead by Aztec Dancers who moved protesters with the sounds of percussion instruments in the background through the streets of downtown.

In Otay Mesa, about 1,000 protesters gathered outside of the detention center where a number of people seeking asylum are being held, many of whom have been separated from their children.

Interfaith leaders from all over the state traveled to the region on several buses for the march organized Pico California and the San Diego Organizing Project.

“I represent the lineage, the bloodline of 12 million Africans that were put on slave ships to come across the transatlantic. I also represent 36 percent of the prison population in America, that look like me, that come from the lineage of me, we came to say that we understand what it’s like to be in cages, to be locked up in prisons, and many times unjustly,” Bishop Terrell Fletcher with City of Hope International Church said.

At one point during the march, cheering from people inside the detention center could be heard on the outside.

Some time later outside the detention center, a different group of protesters called Generation Justice arrived and blocked the street used by CoreCivic employees and other law enforcement officials. These remaining protesters were undeterred by the possibility of getting arrested.

He ended his remarks by reading some of the words from the inscription on the Statue of Liberty.

“Give me your tired, your poor, your huddled masses, yearning to be free. Send these families, these children, these brothers, these sisters, to me, send them to me, and I lift my lamp beside the golden door,” Reverend Herring read to the crowd.

Marches, rallies, and protests have continued through the week and are expected to continue in San Diego and across the country in the coming days.