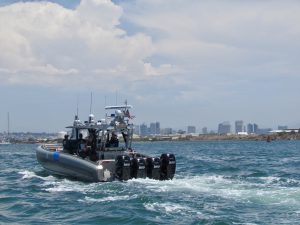 U.S. Customs and Border Protection (CBP) announced the latest addition to its maritime fleet to combat the increasingly frequent smuggling coming into the U.S. coast from Mexico.

The vessels are equipped with the latest technology, enabling better detection of the boats being used by criminal organizations that have had to find new alternatives for transporting either large quantities of drugs or groups of undocumented immigrants.

The new Coastal Interceptor Vessels (CIV) are faster and have a longer range. While the U.S. holds a contract for 52 CIV SAFE boats, it presently has 12 in its nationwide fleet, three of which will operate in San Diego waters.

Director of Marine Operations in San Diego Jeremy Thompson said, “The Coastal Interceptor SAFE Boat is a very capable vessel which will assist air, ground and maritime agents in apprehending smugglers and potential terrorists and is a welcomed addition to our fleet.”

According to Border Patrol data, so far in 2018 there have been 69 incidents along the San Diego coast, leading to the arrest of more than 200 persons and 46 drug seizures.

Drug and people smuggling by sea continues to rise, perhaps due in part to enhanced land border security – the motivation behind the intention to build a wall between the U.S. and Mexico.

As a result, criminal organizations have been forced to find new routes and tactics for transporting people or large quantities of drugs. The rise in the number of these cases has even led the U.S. District Court for the Southern District of California to consider creating a special unit to prosecute people involved in this criminal activity.

In the last Fiscal Year, a record-number 500,000 pounds of cocaine were seized on their way to the U.S., with a street value of $6 billion dollars, according to the U.S. Coast Guard. They also arrested 708 people now facing trafficking charges in San Diego courts. Thus the investment by CBP in modernizing its fleet, particularly in such a high-incidence are such as the California-Mexico border.

The new vessels provide agents with additional speed and maneuverability, and its radar and sensors can work with other aviation assets.

Operated by a crew of three border agents, the vessel can reach a cruising speed of 66 mph, and has a range of 350 nautical miles.