Changes in Store for Mexico’s Border Region Under Incoming Administration 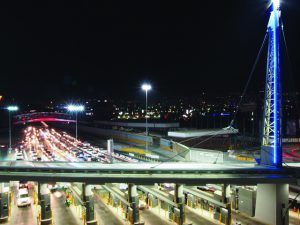 The new government under incoming President Andrés Manuel López Obrador plans a series of changes to close the gap between socioeconomic conditions south of the border and the U.S. border region. Among them, lowering taxes, doubling minimum wage, matching fuel and electricity prices, and moving Customs from 20 to 100 kilometers south of the border.

The first – and most anticipated – change will be the customs-free zone, a 30-kilometer strip starting at the border where the Value-Added Tax (VAT, or IVA, for its initials in Spanish) would be lowered to 8 percent, i.e., half of the 16 percent charged in the rest of Mexico, to close the gap between the VAT and the sales tax in the U.S.

In the first few hours of the new Administration, the customs-free zone was expanded to include Ensenada, the only city in Baja that would have been left out due to its distance from the border.

Income tax (ISR, for its initials in Spanish) are also being lowered for residents of the 30-kilometer. strip, and have been set at 20 percent of income. This will also close the gap with the U.S., where the tax code allows deductions not offered in Mexico.

Additionally, starting on Jan. 1, minimum wage will double in the customs-free zone, from the current 86.36 pesos per day to 176.72 pesos per day (about 8.50 a day in U.S. dollars, based on recent currency exchange rates).

By moving customs 100 kilometers. From the border (approximately from 12 to 62 miles), serval items that used to be subject to tariffs will now be able to be offered at retail without the price hike.

While matching electric rates with those in the U.S. will benefit Mexicali in particular, but also Tecate and Tijuana, matching gas prices could make gasoline more expensive in Baja California, since California has one of the highest gas-related taxes in the U.S., and these amounts would be incorporated south of the border.

In addition to all these measures, Mexico’s incoming government will promote urban development with the goal of improving quality of life and bring it closer to that enjoyed in the southern U.S.

Finally, the Administration has announced that, under its National Federal Agency Decentralization Plan, Tijuana will become the home of the National Immigration Institute (INM, for its initials in Spanish), to be located next to the world’s busiest border crossing. Tonatiuh Guillen, former director of the think tank Colegio de la Frontera Norte (COLEF) has been named INM Director.