The Chicano Blowouts and Their Transformative Effect 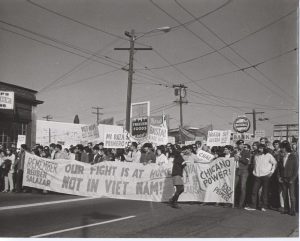 Angry over how they were treated and in an effort to push for educational equality, 50 years ago nearly 20,000 Chicano students walked out of their classrooms in East Los Angeles, something unimaginable in those times. The walkouts would have a transformative effect.

Professor and activist Isidro Ortiz of San Diego State University’s Chicana and Chicano Studies Department led a discussion of the Chicano Blowouts of 1968 as part of KPBS One Book One San Diego series of events at the Central Library in downtown San Diego.

Ortiz began with a video of a PBS series called “Latino Americans,” where the narrator said Latinos, “Seemed destined to remain in society’s underclass. Over 100,000 students attended Los Angeles public schools, but their graduation rate was one of the lowest in the country. It had been that way for generations.”

He also explained there were certain conditions present in order for students to carry out the protests, including access to resources. One of those was Sal Castro, an East Los Angeles native who taught at Belmont High school. In the PBS video, Castro recalls approaching a principal over concerns about Chicano students not participating in student council or academic programs. The principal contacted Castro after their initial conversation telling him, “Mexicans have a charming passivity. You wouldn’t want to take that away from them do you.”

Community activist and entertainment executive Moctesuma Esparza is also in the video. He explained that in a time when students were punished for speaking Spanish, Castro made him feel “loving Mexican culture and our own heritage was actually cool. And that was both unsettling and revolutionary—and exciting.”

Ortiz said Castro looked to organize the students, and they planned the walkouts over several months. Through his efforts, he enabled students to do what sociologists call, “Cognitive liberation,” which allowed students to free their thinking and also enabled them to free themselves of thinking about ideas that had kept them passive.”

Ortiz explained there’s a long history of student activism, but what had been missing was the Chicano contribution.

“They were so large that for a long time they actually stood as the largest student protests ever conducted in the history of American public education, until last March of this year when students walked out of schools across the country to protest gun violence, that the standing of the walkouts had was actually eclipsed,” he said.

Ortiz also said the walkouts were the first major protests from the emerging generation which called itself Chicanos, and they marked a new chapter in the struggle by Chicanos for educational equality in the United States.

He also explained sociologists would describe the walkouts as a demonstration of a willingness to violate the rules of the game. The walkouts were a break from relying on traditional tactics of indirect action, lobbying, and litigation. Students took to the streets instead of trying to work within traditional channels of the political system. They mount to a transformational resistance against unequal educational conditions which they faced as part of a larger insurgency occurring throughout the 1960’s. Ortiz also said the walkouts were inspired in part from sit-ins in the South by Black students which triggered a whole series of actions across the South and other parts of the United States by students and college students primarily who were resisting segregation they faced.

Ortiz said referred to 1968 as tumultuous. In April of that year, civil rights leader Martin Luther King Jr. was assassinated. That same year in June, Robert F. Kennedy was assassinated. Protests were also being held all over the country, as well as in Mexico.

Ortiz said students were confronted with the faces of oppression on a daily basis, including powerlessness which was evident in several ways such as the fact that students had no representation on the school board.

Students came up with list of demands which included teachers should not be reprimanded for working for racial equality, inclusion of bilingual education programs, and the development of textbooks and curriculum showing Mexican American contributions.

He also said the Los Angeles Unified School Board rejected the students demands, but it didn’t mean that nothing changed. Earlier this year, the LA Times reported that a year after the walkouts, UCLA’s enrollment of Mexican Americans soared from 100 to 1,900. Over the decades, college enrollment increased from 2 percent to 25 percent nationwide. Chicano studies programs were founded at colleges and universities across the nation. More Mexican Americans also entered the ranks of vice principals and principals in the Los Angeles Unified School District.

Ortiz said the biggest transformation took place within the students themselves. He said the walkouts served as a stage to overcome fear, develop skills, and mobilize other efforts.

Among his final comments, Ortiz said, “The Blowouts broke with the precedent of playing by the rules, and established protests as legitimate forms of effecting social change.”