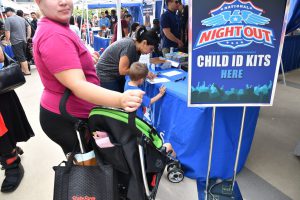 Families from Chula Vista gathered outside the local police department headquarters as part of a celebration which looks to create better relationships between officers and the community.

The 10th annual observance of National Night Out by the Chula Vista Police Department packed the headquarters’ front plaza with officers, activities, food, and resource booths.

CVPD Lieutenant Henry Martin was the officer in charge of hosting the event this year. He spoke to La Prensa San Diego about some of the things that could be seen throughout the event.

“We invite the whole community so that they get to know us; we have SWAT Team demos, the K9 unit is here, the Chula Vista Fire Department — who are our partners in keeping the community safe — are also here,” said Martin.

Other activities included a dance competition, a jaws of life demonstration, and a cookie with a cop activity in which kids and officers had the chance to interact by sharing and decorating cookies donated by a local Hometown Buffet location.

The event featured police station tours as part of its activities. CVPD Chief Roxana Kennedy spoke about the importance of opening up the doors of the department through such an event.

Informational booths for groups such as the Community Emergency Response Team and the Senior Volunteer Patrol were also present and looking to reach locals whom might be interested in volunteering in these.
Chief Kennedy explained that one of the biggest takeaways for attendees is seeing that officers are also human.

“The first thing many people get to see is that there is a heart behind the badge, these are father and mothers, they are people who have children who also go to school and are also human; we are just like them,” she said.

She also highlighted that having a good relationship with the community is a major factor in keeping Chula Vista’s crime rate among the lowest among similar-size cities.

“Our crime rate is low and that is based on the fact that we have a good relationship with the community so our community members feel comfortable coming to us and sharing information and see our officers as people who can help them,” Kennedy said. “It means everything to us to connect to the community and to all work together to keep Chula Vista safe.”

According to a City of Chula Vista press release, National Night Out was first observed in 1984 by the civilian organization National Town Watch to bring the public closer with local police agencies.