Citizenship Is Not a Bargaining Chip 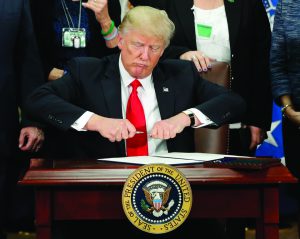 Another week, another outlandish boast by Donald Trump aimed at distracting attention and enraging his base voters just days before the election.

This time, again, it’s immigration and immigrants being used as piñatas in Trump’s scheme to energize his base in key elections that are, for Republicans, becoming frighteningly competitive.

According to most political polls, Democrats are poised to retake control of the House of Representatives, dealing a major blow to Trump and the Republicans.

But, the US Senate is leaning toward the Republicans maintaining control, and giving Trump two very important wins: more appointments of conservative judges, and denial of articles of impeachment that a Democratic House may pass if they regain control.

When Bill Clinton was impeached by a Republican-led House of Representatives, it was the Senate with 45 Democrats that rejected the impeachment by denying them at least 67 votes.

Trump is so scared of losing the Senate that he campaigned in Texas last week for Ted Cruz who Trump famously labeled “Lyin’ Ted” during the presidential campaign. Oh, politics makes for strange bedfellows.

This week, increasingly desperate to save some close campaigns, Trump went back to his playbook to hit on an issue that helped propel him to the White House; race baiting.

Seizing on a caravan of migrants heading North from Honduras, Trump labeled it an “invasion” and insisted, wholly without proof, that ISIS and “Middle Easterners” were imbedded within the caravan of refugees fleeing their homeland.

The fact that the caravan is still more than 1,000 miles away in Mexico didn’t stop Trump from declaring that he may send up to 15,000 active military troops to patrol the border, making what he called a “wall of humans” along the frontier, and warning that troops could shoot at migrants who throw rocks at the soldiers.

And this week, he dropped two new bombs. In one fell swoop, Trump announced that he will sign an executive order to both deny citizenship to people born in the US of undocumented immigrants, and to also limit the number of asylum cases the US accepts.

Well, where to start?

First, the right of citizenship based on being born here is protected by the 14 Amendment of the Constitution, passed in 1868, right after the Civil War. Aimed at ensuring that children of freed slaves were protected as US citizens, the 14th provides that “all persons born or naturalized in the United States and subject to the jurisdiction thereof, are citizens of the United States and of the State wherein they reside.”

Let’s deconstruct that a little more.

Anyone born here, regardless of where the parents came from, are citizens by right. It’s called Jus Soli, a Latin term meaning from the soil. In some countries, citizenship is derived from the parents’ status, also called Jus Sangrias, or from the blood.

Trump and his friends on Fox News have been arguing all week that the language is not clear, although conservatives have long argued for interpreting the Constitution literally, word for word.

What’s worse, Trump is suggesting that he can change this by executive order, without any action by Congress and the states.

The right of citizenship is only discussed in the 14th Amendment, and was not even in the Constitution for its first 90 years of existence.

But, since its passage, the 14th Amendment is the law of the land, supported by several Supreme Court decisions about citizenship.

Any change to the rights outlined in the 14th could only be changed by a bill passed with two-thirds votes in both houses of Congress, then ratified by at least 34 state legislatures.

Yes, that’s a high hurtle to overcome, and that’s exactly how hard our founding fathers intended changed to the Constitution to be.

So then, why would Trump even suggest such an seemingly impossible change of a fundamental American right? Because it’s shocking, it’s controversial, and because it works to rile up his base voters.

This week also saw Trump send out a Twitter link to a video about immigration, featuring the story of an undocumented immigrant that has been convicted of killing two deputies. The video declared that “Democrats let him stay”, but it turns out, Trump was wrong. Again.

The truth is that murderer was first deported in 1997 during the Clinton Administration, and he returned in 2001, during George W. Bush’s first year in office. He was deported again then returned illegally again in 2002, still in Bush’s first term.

The murderer stayed in the US for six more years under Bush then five years under Obama until the heinous murders of the two officers.

So, no, Democrats didn’t let him stay, Bush did. But that’s just too nuanced for Trump. He never let’s the facts get in the way of a good lie.

Immigration is an important issue that deserves serious attention and consideration. Our economy, safety, and future depend on finding real solutions to the continuing and growing pressure of both documented and undocumented immigration.

Lies, exaggerations, and fear-mongering only serve to distract and divide us. That may serve Trump’s immediate goal of winning an election or preserving a Republican Senate, but it further deteriorates our political discourse and encourages hate and conflict.

Anyone that doubts the tragic killing of 11 people at a Synagogue in Pittsburgh, the bombs sent to leading Democrats, and the killing of two African-Americans at a Kentucky grocery store, which all happened last week, are at least partly fueled by the hateful tenor of our public discourse is lying to himself.

Words matter, and the way our President uses them as weapons of mass destruction is dangerous. Dangerous to the effectiveness of our government and dangerous to the well-being of our democracy.

Next week, one of two things will happen in Washington, and the rest of the country.

If Democrats retake the House, maybe some balance will come to Congress.

If not, Trump will feel more empowered and vindicated in his scorched Earth approach to politics. If that happens, hold on for years of heated, divisive fights not just in politics, but quite possibly, in our churches, stores, and even the streets.

Scary to think, but, now, not hard to imagine.