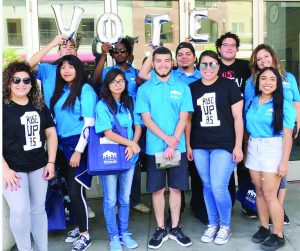 All across the country, voter enthusiasm was at an all-time high this past midterm election, including here in San Diego.

As many as 31 million ballots had already been cast nationwide just days before the election, the New York Times reported.

On election day, inside a small room in City Heights, volunteers moved in and out throughout the day in what capsulated the final day of get out the vote efforts to neighborhoods ignored by traditional political campaigns. The energy and enthusiasm of the election was also felt there.

Brenda Diaz, the Civic Engagement Team Lead with the non-profit Mid-City Community Advocacy Network (CAN) talked about the response from residents as volunteers called and knocked on the doors of their homes to go out and vote.

“We’ve been seeing a lot of people thankful because nobody is really knocking on these people’s doors just because they are low propensity voters,” she stated.

Organizers with Mid-City CAN were working the elections to turn out people of color, working families and the immigrant and refugee residents that make up City Heights. But they were also looking past the midterms, eyeing the future and beyond to create a new electorate. Their efforts to turn out voters this election is part of a long-term plan to increase the number of voters in the upcoming presidential election in 2020, still two years away.

They also want to change the reputation from a community that tends not to vote to one that does by increasing the number of voters in the hopes of getting decision makers to take the needs of residents seriously.

Griselda Ramirez, the Director of Civic Engagement at Mid-City CAN addressed the reputation in City Heights for low voter turnout and stated, “In 2014 City Heights had 27 percent voter turnout. The Kensington community had somewhere in the 70s and we are neighbors. That’s not good. Same district, neighbors, one street away. If you see the two communities, you can see the disparities there.”

Ramirez, also talked about the overall voting goal, “To build a voter block of 5,000 voters so they vote actively. What that means, since we do advocacy, we can go to a City Council meeting and say, we have voters not supporters. We can say this is what our community wants. We have 5,000 voters here in support of this, how are you going to make it happen.”

City Heights Votes is the name of the campaign. For the midterms they began their efforts in September, but their initial launch began in 2016. They also did similar efforts in the June Primary of this year.

Along some of the community’s major street corridors, including University Avenue and Fairmont Avenue, banners hang along street lamps featuring the faces of parents, young people and neighborhood leaders with a message, “I am City Heights, I vote,” in several different languages. Some of those featured in the banners have been recognized by strangers when they are walking down the streets.

City Heights is home to immigrants and refugees from all over the world, from Central America to East Africa. The City Heights Community Development Corporation states there are over 80,000 residents and there are more than 30 languages and a number of dialects spoken.

Volunteers included an ethnically diverse group of people including college students, home owners, members of boards and commissions. After training they went out into the different neighborhoods knocking on doors, making phone calls and registering people to vote. Inside the volunteer room it was not unusual to hear volunteers speaking in Spanish, Arabic, Vietnamese, or Samoan.

Mid-City CAN hoped they would get 2,500 people to vote for the midterm elections.

Among the challenges is distrust. Medina said explained how the organization is addressing the issue, “We are working with families who come from countries where it was dangerous to vote to express their voice, especially with a lot of refugees and people living here with asylum, building trust is very important. That’s why we believe in knowing our neighbors, trying to call them, meet them at their homes.”

“A lot of our communities are isolated and divided. It’s much easier for one community to point to another community and say it’s their fault we don’t have a job or for people to point to immigrants or for immigrants to point to refugees,” Medina said.

He added, “We live in a system that’s meant to divide our communities and it benefits off dividing and conquering. We think we can change that system by doing the opposite of dividing, which is coming together making sure we understand. I’m a Latino. I understand my Muslim neighbor. I support them. I see the commonalities and when I vote, I think of my Muslim LGBT queer sisters.”

Medina also pointed out, “It’s the myth of the American dream, pull yourself up by your own bootstraps. You have to compete against everybody else. As Latinos, we come from communities where family is everything. We come from traditions of sharing. We had communal lands. At Mid-City CAN, we’re trying to work towards those traditions of building community. A lot of that has to do with understanding and caring for your neighbor.”