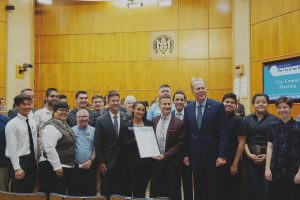 Just days before one of the largest civic events in the city, San Diego’s Pride Parade, the City of San Diego proclaimed the month of July to be “Lesbian, Gay, Bisexual and Transgender Pride Month.”

Fernando Lopez, executive director of San Diego Pride, shared with the council and public present that the organization would not be here without the support of the city.

“The City of San Diego has become a beacon of hope, and that should be a model for the rest of the nation,” Lopez said. “LGBTQ rights and basic human rights are not and should not be a partisan issue. This council and this city and this mayor exemplify that here today.”

Lopez, who became a homeless youth after his parents discovered his sexual orientation, highlighted that it was the support of LGBT nonprofits and community members who helped him.

“It’s kind of surreal for me to have come from that place to now leading this organization, so the importance of this celebration and the meaning that it has to so many in our community is definitely not lost on me it’s near and dear to my heart,” Lopez said.

Councilmember Gomez said Pride is an opportunity to celebrate but also serves as a reflection to the ups and downs of the city’s relationship with the community.

“Our LGBTQ plus community has made great strides toward our pursuit for equal treatment under the law, but we have more to do,” Gomez said.

The first Latino executive director of the nonprofit organization, Lopez shared that the road to justice has been long but they hear a call to press forward with the help of generations learning from each other.

Lopez spoke of those who paved the way like the first pride marchers in San Diego in 1974 many whom had paper bags over their heads because it was legal to lobotomize gay men in California until 1976.

Although many people in the country are politically divided, Lopez said, the city set the example of what bipartisan can look like in support of equal rights.

“To see our entire city council and our mayor regardless of political affiliation stand together in unity and to say that all people are deserving of equality is quite powerful,” Lopez said.

Almost 45 years since the first Lesbian and Gay Parade in San Diego, which celebrated the 1969 Stonewall Rebellion in New York where individuals rioted after a gay club was raided by law enforcement, the nonprofit organization will host its 2018 pride festivities.

San Diego Pride raises funds through the sale of festival tickets, sponsorships, and other sales and distributes them to organizations that work with the LGBT community locally and globally.

Councilmember Ward thanked the nonprofit organization for giving back to a number of community based organizations who reach out to communities of color, youth, binational and transgender individuals.