San Diego Mayor Todd Gloria and City Councilmembers are rushing to approve a new Padres development project before the end of the year to avoid following a new state law, but the expiration of an exclusive negotiating agreement with the Padres last year may now make the deal incompatible with state requirements.

The City’s exclusive negotiating agreement with the Padres expired and may cause the property to fall under more restrictive current state laws that require cities to first offer the land to other local government agencies, then affordable housing organizations, before being able to solicit bids from private companies like the Padres.

In November 2021, Mayor Todd Gloria and the City Council “amended” the negotiating agreement more than two months after it expired and are now trying to use a loophole in state law to avoid complying with more strict requirements to use the land for public benefits, including building more affordable housing units.

A 2019 state law clarified that properties previously owned by redevelopment agencies, including Tailgate Park, must comply with the state’s surplus public lands laws, but provided a loophole for properties under existing exclusive negotiating agreements to proceed under less-restrictive rules, but only if a deal was closed before the end of 2022.

The bill, AB1486, passed the Legislature in September 2019 with then-Assemblyman Todd Gloria voting for the measure three times; once in committee and twice on the Assembly floor.

But the expiration of the exclusive negotiating agreement last year may have ended the proposal’s exemption from the restrictive state law.

A similar case developed last year when the City of Santa Monica attempted to approve a project under the same loophole after its exclusive negotiating agreement had ended. Opponents filed a lawsuit to challenge the pending approval and the City Council decided to end its consideration of the project all together. The City ended up paying $100,000 to the opponents to cover their legal fees after the proposal was abandoned.

The same set of state laws also caused the termination of a proposal to lease the San Diego Sports Arena site last year. That deal, also selected by Mayor Kevin Faulconer, ran afoul of the same surplus land restrictions and had to be re-bid.

Development of the 5.25-acre Tailgate Park surface parking lots near Petco Park was first opened for proposals through a competitive bid process in late 2019. Only two bidders submitted for the project: Brookfield Properties and Padres Next Fifty, a development arm of the San Diego Padres baseball club.

The City Council then approved a 180-day Exclusive Negotiating Agreement (ENA) with the Padres effective December 3, 2020, which included a one-time 90-day extension, if necessary to complete the transaction.

The language of the ENA states that, if a signed purchase agreement is not delivered to the City by the last day of the ENA, then the “Agreement shall automatically terminate and the Developer shall have no further rights regarding the subject matter of this Agreement or the Site.” 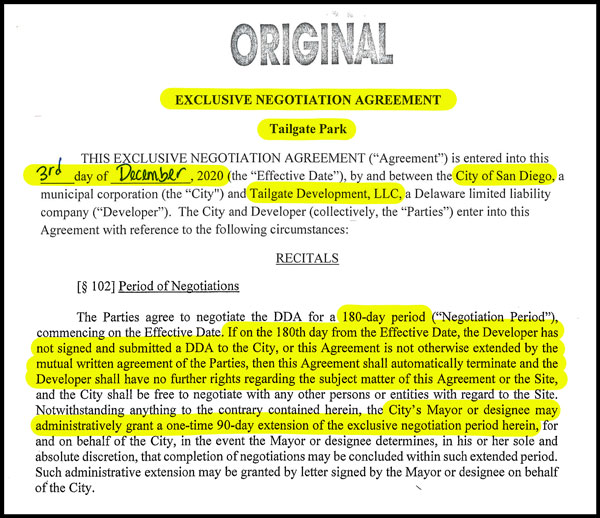 Given the 180-day period and the 90-day extension, the exclusive negotiating period expired on August 30, 2021. A City staff report states that the ENA was valid through September 2021.

But, then more than two months later, the City Council later voted to “amend” the ENA on November 2, 2021 when it approved a “First Amendment” to the ENA, even though the agreement had expired.

The amendment extended the ENA “until January 31, 2022” at which time the ENA expired again. 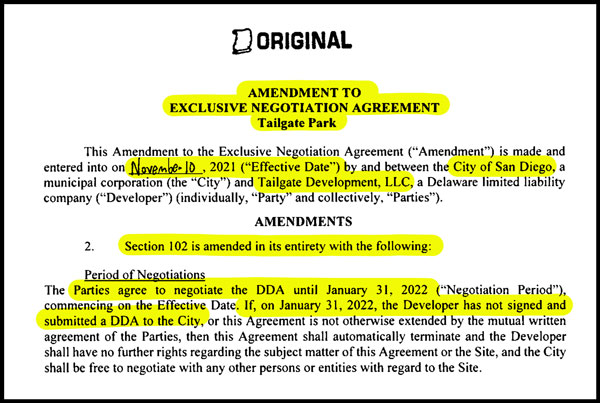 The City did not receive a signed Disposition and Development Agreement (DDA) by January 31st as was required by the amendment to the expired ENA. The version of the DDA presented to the Council’s Economic Development and Intergovernmental Committee on March 9th was unsigned.

The Mayor’s office has been pushing for quick approval of the deal by ignoring the expiration of the exclusive negotiating agreement in an attempt to still use the exemption loophole instead of ending the Padres proposal and offering the Tailgate park property to other local agencies or affordable housing developers.

Continuing down the path of approval of the current proposal may draw opposition from affordable housing advocates and even lawsuits similar to the project in Santa Ana.

During the period of exclusive negotiations between the City and the Padres, the design of the proposal changed dramatically.

The current proposal is now slated to include 1,800 apartment units, 50,000 sq. ft. of commercial spaces, and over 1,200 spaces in a car parking structure, and designates 270 apartments to be reserved for low-to-moderate income families at affordable rates, which is 15% of the total units.

But new state law changes now require that at least 25% of the units be affordable, resulting in no fewer than 450 affordable apartments on site, instead of the 270 currently planned.

The committee staff report and presentation both mention that the project must close “no later than December 23, 2022,” but do not explain any reason for the deadline. The report also admits that the original ENA expired, but carefully avoids providing clear details.

The property, owned by the City of San Diego, was previously under the control of the Centre City redevelopment agency which was dissolved under changes to state law in 2011.

Over 400 redevelopment agencies in California were dissolved and the state’s Department of Finance now oversees the disposition of properties previously owned by those agencies.

“The well-documented shortage of sites for low- and moderate-income housing and the regional spillover effects of insufficient housing demonstrate ‘extramunicipal concerns’ justifying statewide application of the Act’s affordable housing priorities,” the court ruled.

After that case, AB1486 was written to clarify that all cities are subject to the state’s surplus land requirements, included when dealing with properties formally owned by redevelopment agencies -as Tailgate Park was- but also provided a loophole for deals which were already being negotiated when the bill was passed.

Under the state’s surplus land laws, such properties are encouraged to be developed for uses beneficial to the public, including affordable housing projects.

Another significant component of the current deal is that the City has now offered to discount the sale price of the property by $42 million from its appraised value of $75 million.

The determination to discount the property by the City is related to a lease of Tailgate Park for use by the Padres which continues through 2044. The agreement allows the team to use the parking lot for every one of its 81 home games and 10 additional days for other events, but the City retains control on the remaining 274 days of the year.

The Padres split 35% of their parking revenues from Tailgate Park with the City, resulting in over $600,000 per year to the City and over $2 million to the Padres.

The appraisal calculated that a parking structure built on the site to accommodate the current 1,060 parking spaces would cost an estimated $42 million. City staff then used that cost to advocate for a discount to “replace” the parking required under the lease, but failed to give any value to the lost revenue to the City for games days and the remainder of the year.

Under the City’s current proposal, the City would lose the revenues from the parking lot, estimated to be nearly $20 million, plus the revenues from monthly parking customers and special events held throughout the year.

Under the current proposal, the Padres would pay $35.1 million for the property, but the proceeds would be divided among several local public agencies who receive property taxes. The City’s total income from the sale would be less than $6 million.

Critics charge that the City is giving the Padres an exorbitant discount and is also losing future revenues from the parking lot without receiving just compensation.

Real estate experts who reviewed the City’s proposed discount questioned the reasoning behind the nearly 60% reduction in the current market rate of the property which was not offered in the appraisal.

The rush to approve the Tailgate Park proposal is similar to arguments used in 2016 when the City rushed to approve the acquisition of the 101 Ash Street building through a 20-year lease-to-own agreement that which also faced an end-of-year deadline.

The City leased the building in 2016 but later vacated it in January 2020 after loose asbestos was detected throughout the 19-story tower. The City is now involved in numerous lawsuits over the building and is suing to terminate the lease.

During the City Council’s discussions of the 101 Ash lease in 2016, then-Councilman Todd Gloria said the deal “seems to be a very smart financial transaction” and that “I see this as win all the way around”  and that “it’s a better business arrangement for the taxpayers.”

Last month, when the Tailgate Park proposal went before the Council committee for approval, Councilman Raul Campillo, the Committee’s Chairman, said “this is a great deal for the city of San Diego, and part of that is because the Padres are one of our closest partners” and that “what the development team has put forward here today is a great project.”

When the Padres first announced their proposal in February 2020, their development team “partners” included Cisterra Development, which is the landlord on the 101 Ash building and is accused by the City of having paid the City’s broker more than $9.44 million in undisclosed profit splits on 101 Ash and the Civic Center Plaza leases. The City is currently suing to invalidate the leases because of the conflict-of-interest created by Cisterra’s payments to Hughes.

After the 101 Ash St deal became controversial in mid-2020, the Padres dropped Cisterra’s name from the Tailgate Park proposal, but neither of the companies has confirmed that Cisterra is no longer a partner in the proposal.

In fact, Cisterra’s website still lists Tailgate Park as a featured project and details the company’s work on the proposal.

“Cisterra served as the development consultant to the San Diego Padres, Tishman Speyer and Ascendant Capital in the Request For Qualifications (RFQ) and Request For Proposal (RFP) submittal processes for Tailgate Park,” the website reads.

The Padres also used Southwest Strategies as its lobbyists before the City, including specifically lobbying the Mayor’s office and City Councilmembers in support of the Tailgate Park proposal.

Southwest Strategies, and specifically its President, Chris Wahl, have been involved in the 101 Ash debacle through its representation of Jason Hughes in 2013, the owner of 101 Ash in 2015, and Cisterra and its affiliated companies in 2021 and 2022 as they work behind-the-scenes to settle the outstanding lawsuits.

Southwest Strategies also employed the wife of then-Mayor Kevin Faulconer’s Chief of Staff to lobby Faulconer and her husband on behalf of the Padres in 2016, before she eventually went to work directly for the club.

Diana Puetz was later hired directly by the Padres and is now the Vice President Director of Public Affairs. Puetz is listed as part of the team’s development arm pursing the Tailgate Park project, Padres Next 50.

Her husband, Stephen Puetz, was Faulconer’s Chief of Staff until 2017, but recently ran Faulconer’s failed campaign for Governor during last year’s recall election.

The City’s attempt to use of the loophole to avoid the state’s surplus land requirements would result in at least 180 fewer affordable units being included in the proposal development.

If the property were offered to other local agencies and affordable housing organizations, many more, if not all, of the development’s units could be affordable.

The state’s Surplus Land Act -which the City and Padres are trying to avoid- is intended to help increase the availability affordable housing development by prioritization of affordable housing on public lands no longer necessary for official agency use.

Mayor Gloria, a vocal advocate for building more affordable housing, did not respond to requests for comment on the proposal which could result in a lower number of low-rent units. His spokesperson, Rachel Laing, responded to the request by saying she was “running down this information” but no further response was received.

A message left for Padres CEO Eric Greupner seeking comment on their Tailgate Park proposal was not returned.

The Tailgate Park proposal is expected to be heard before the full City Council at its next meeting on April 11th.