Committee Proposed to Break Barriers for Women at Work 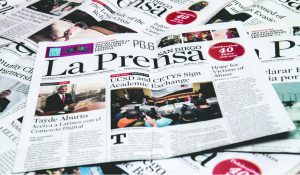 With the goal of fostering an inclusive workplace where all employees can advance and reach their highest potential, San Diego Mayor Kevin L. Faulconer proposed a new committee charged with advising city leadership on strategies to develop women leaders and provide more opportunities for women in the workplace.

“San Diego is fortunate to have many women leaders who perform exceptional work on behalf of the residents we serve. From public safety officers to park employees to department directors, there are countless women who elevate our city,” Faulconer said. “This new commission will focus on leveling the playing field so that women can realize their fullest potential.”

The new Committee to Advance Women and Girls will be responsible for developing meaningful ways for women and youth to achieve professional success by facilitating important collaboration between female leaders, government and the private sector. It will have a special focus on the workplace policies and practices within the City of San Diego.

When it comes to gender equality in the workplace, large gaps exist nationally between men and women in employment rates, the jobs they hold and the wages they earn. According to the Pew Research Center, in 2016 the median working woman earned roughly 83 cents for every dollar earned by a man, and women still lag behind men when it comes to holding top leadership positions in government and business.

To curb this trend at the local level, the City has taken steps to foster gender equality and diversity in the workplace. The City was one of the first municipalities in the state to provide four weeks paid parental leave for both men and women, including benefits for both parents at the same time if they each are employed by the City of San Diego. Other benefits include education and tuition reimbursement, new “Diversity, Equity and Inclusion” training, alternative work schedules and breastfeeding accommodations.

The City of San Diego has many trailblazing women in positions of leadership throughout the organization. Led by City Council President Georgette Gomez, the Council is made up of a female majority for the first time in history. City Attorney Mara Elliott is the first woman to serve in that role. Other top positions held by women include the Mayor’s Chief of Staff, Chief Operating Officer, Assistant Chief Operating Officer, City Clerk, Independent Budget Analyst and 13 department directors.

The Committee to Advance Women and Girls, which replaces the inactive Commission on the Status of Women, will consist of volunteer members, each appointed by Faulconer and confirmed by the City Council. This spring, the Mayor’s Office will bring forward proposed changes to the Municipal Code, guidelines and objectives for the committee. The mayor will then request nominations from each of the Councilmembers.

The creation of the committee is part of “Women Elevate SD,” Faulconer’s inaugural effort to honor and recognize the contributions of women leaders during Women’s History Month.