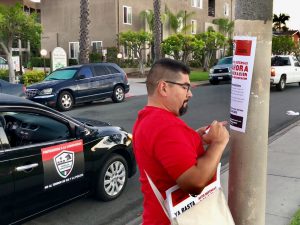 Dawn has not yet come to the Linda Vista community, but a group of advocates is already up and working to protect the rights of local immigrants.

These self-appointed “community patrols” have been reinstated in response to the enhanced threat of immigration raids brought about by current hardline policies. They are private citizens who patrol in their own vehicles marked with signs indicating that they are out “protecting the community”, and “NO to ICE and Police Terror” on their car doors.

Unión del Barrio volunteers said that the patrols were originally started in the nineties by this San Diego-based political organization, as a response to police departments collaborating with federal agencies.

The community patrols were reinstated mid-July of this year after an operation that led to the detention of over 100 people in San Diego and Imperial counties.

The activists chose Linda Vista, a community with a large Mexican and Vietnamese immigrant population, because they feel it is “one of the hardest-hit by ICE in recent months.” Some of the neighbors corroborated having seen the detentions happen.

The community patrols start doing their rounds of the neighborhood since very early in the morning and try to do this at least twice a week. If they spot a vehicle they suspect could be ICE, they inform people on social media and document the incident.

These “community self-defense” activists are well aware of the fact that they cannot interfere with ICE operations. If an officer goes after someone, all they can do is make sure that their rights are not violated, record the incident, and advise families as to what their next steps are, said Unión del Barrio representative Benjamin Prado.

“We are just monitoring,” Benjamin said. “We also want to encourage the community to publicly report ICE activities, precisely because they do it undercover sometimes. We obviously cannot interfere if they already have someone, the goal is to do preventive work,” he added.

According to Prado, they have confronted ICE twice since July. The first time, they witnessed a raid outside of a fast-food restaurant, and some days later, they encountered a vehicle they suspected was being driven by ICE officers.

To strengthen their preventive work, the organization puts up posters with their contact information on utility poles around the neighborhood. While they are putting them up, some people are curious and approach them to ask about what they are doing or even to share their own experiences.

The end goal is to create neighborhood groups so that, eventually, they can be the ones protecting the immigrant families that reside in their community, said Armando Abundis, another member of Unión del Barrio.

They hope to be able to expand these patrols soon to other places around the county where they could be needed. “We would like to grow into other communities, but this is the community that needs us the most,” added Abundis.