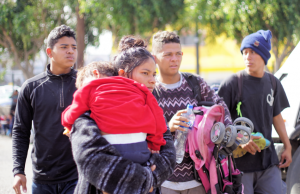 County health officials have been working this week on controlling an influenza outbreak involving a group of about 120 migrants brought form South Texas.

The migrants were transferred to San Diego after officials near McAllen, Texas temporarily closed a detention center made up of tents due to a flu outbreak.

Border Patrol made the decision to transfer migrants from Texas to San Diego and elsewhere in the U.S. following the death of a 16-year-old Guatemalan immigrant while in South Texas as a result of complications stemming from influenza.

San Diego County Deputy Public Health Officer Dr. Dean Sidelinger said last week that 16 migrants out of that group were under medical observation in isolation from the rest of the community because they exhibited “influenza-like” symptoms.

However, official numbers show that the number had grown to 32 people by the weekend.

The migrants started to present symptoms of the virus after being flown out of Texas. They started arriving to San Diego on May 19th, and approximately 4 days later, at least 16 people out of the group started showing symptoms at a shelter set up in a former family court building on 6th Street.

By May 24th, health officials had reported 13 new cases among 47 recent arrivals, increasing the number of cases to 29 since May 19.

On Saturday, two additional cases were reported by health officials among 34 new migrant arrivals from Texas.

Some of the migrants identified with influenza remain in the shelter, but in an isolated wing away from other families to keep the outbreak from spreading. 24 people are being isolated off-site at a hotel to avoid contact with the rest of the migrants at the shelter.

A single additional case was detected this past Sunday.

The conditions under which the migrants are being held in San Diego are very different those in Texas which could have contributed to the influenza outbreak. According to testimony by migrants in McAllen, immigration officials kept them locked up in facilities at very low temperatures, and when some of them started to get sick, they were not provided medical attention immediately.

County Supervisor Nathan Fletcher, who has spoken out in favor of migrants, confirmed that conditions for families in San Diego are better to what they had in Texas. “We have a rigorous screening process and medical staff, and that is what enabled us to quickly identify the issue and take steps to address it,” he said.

Border Patrol is not obligated to transfer migrants within any particular time, although protocols state that minors should be transferred to a children’s shelter within 72 hours of being processed. When CBP began sending them to San Diego, they stated that the families were being transferred in response to a “humanitarian and security crisis.”