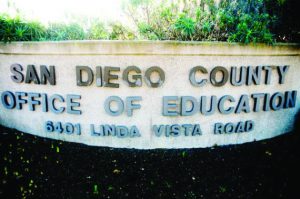 The San Diego County Board of Education’s Superintendent failed to report expensive dinners he received from lawyers that worked for the county district at the time, and he now denies the dinners ever happened.

Dr. Paul Gothold, who was hired as the county schools Superintendent in June 2017, reportedly had at least two dinners with the lawyers while he was seeking the post in San Diego.

“Paul Gothold asked us for help in securing the job of San Diego County Superintendent,” one of the lawyers told La Prensa. “Paul and his wife wanted to move to San Diego on a permanent basis and he asked us to make that happen,” the lawyer added.

At the time, Gothold was serving as Superintendent of Lynwood School District in Los Angeles County, and had a long-standing relationship with the lawyers that had done contract work for Lynwood during his tenure there. Gothold had previously served as Lynwood’s Assistant Superintendent.

Gothold reportedly attended a dinner in December 2016 in San Francisco and another in April 2017 in Long Beach with two lawyers whose law firm was under contract with both Lynwood and the San Diego County Office of Education at the time.

Gothold was interested in applying for the permanent role in San Diego that was being held on an interim basis after long-time Superintendent Randy Ward had resigned.

At the dinners, Gothold reportedly asked the lawyers for their help in convincing San Diego County Board of Education Board members to support him for the job.

The first of the dinners took place in December 2016 in San Francisco during the convention of the California School Board Association, an annual meeting of school board members from throughout the state.

The dinner included two San Diego County Board of Education members. Both members reported the dinner on their annual gift disclosure forms, each claiming an $80 value. One of the Board members also reported another dinner from the lawyers which took place on May 17, 2017, just days before Gothold was selected by the Board.

The second dinner took place at in Long Beach in April 2017. Three witnesses to the dinner confirmed to La Prensa that Gothold attended that dinner.

La Prensa requested comments from Gothold for this story. A response was received from Music Watson, a spokesperson for the SDCOE.

The email denies that Gothold received any gifts or dinners from anyone related to the law firm, stating that “I have never received any gifts, including meals, from [the lawyers] or anyone from their law firm.”

Gothold is required to disclose any gift of $50 or more (or combination of gifts totaling $50 or more in a year) on his annual Form 700 Statement of Economic Interest filings required in his role as Superintendent, which was also required in his prior role at Lynwood. Upon his appointment in San Diego, Gothold filed a Form 700 that covered the 12 months leading up to his new position.

A review of both his last 700 form from Lynwood and his first filing in San Diego, which overlap in the period they cover, showed no disclosures of any gifts from the lawyers that hosted the December 2016 and April 2017 dinners. Only government officials receiving gifts are required to disclose gifts, not the person providing the gift. The proportional split of the dinners totaled more than $50 in value.

“I paid for the dinners on my credit card and Paul Gothold accepted the dinners without paying his portion of the bill,” one of the lawyers said. “I assumed he would report it, but it doesn’t appear that he did,” he concluded.

The law firm represented the San Diego County Office of Education, Poway Unified School District, and San Ysidro School District at the time, but now no longer represents those clients.

The lawyers contend that Gothold actively asked for their help in securing the San Diego post because he believed the lawyers had influence with the board members that would be making the selection.

La Prensa San Diego asked Gothold if he knew or had any “reason to believe that [the lawyers] had any influence on [his] selection as San Diego County Superintendent?” Gothold answered “No” to that question.

Golthold was also asked if he knew or had reason to believe “that any members of the San Diego County Board of Education met with [the lawyers] relative to [his] selection as Superintendent before [he was] selected by the Board?” Gothold also answered “No” to that question as well, even though he attended at least one meeting with the lawyers and two board members.

The lawyers contend that Gothold attended the December 2016 meeting hosted by the lawyers in San Francisco specifically to meet the San Diego County Board members in anticipation of applying for the position in San Diego.

Robert Stern, a former lawyer for the California Fair Political Practices Commission and founder of the California Center for Governmental Studies says Gothold violated the state law requirement to disclose gifts, especially if the person is also a vendor to the district Gothold represents.

“People don’t just buy dinners for decision-makers for no reason,” Mr. Stern said. “Dr. Gothold has been a top administrator for years and should be very familiar with the conflict of interest filing requirements for gifts from vendors,” Stern added.

Failing to report gifts from vendors is a violation of state laws designed to avoid conflicts of interest between officials and those they oversee. The official must sign the form under penalty of perjury to attest to its accuracy. Gothold has filed at least four Form 700s that should have included gifts from the lawyers, but none of them do.

Other local officials that filed inaccurate forms have been charged with filing false documents and perjury.

In 2011, several school board members and administrators from Sweetwater, Southwestern College, and San Ysidro School District were indicted by the San Diego County District Attorney’s Office for accepting dinners and other gifts from vendors involved in or seeking contracts with the districts.

In all, 18 people were charged with 250 counts in the wide-ranging corruption scandal. Three local superintendents were convicted of misdemeanor charges for failing to report gifts.

Southwestern College Superintendent Raj Chopra was convicted in 2013 of a misdemeanor charge of failing to file state disclosure forms. He was sentenced to 42 hours community service; three years probation; and a $4,500 fine.

San Ysidro School Superintendent Manuel Paul was convicted of a misdemeanor charge of filing a false document. He was sentenced to three years probation, 40 hours community service, and fined $4,589. Paul was later convicted in federal court of accepting cash from a contractor and served 60 days in federal prison.