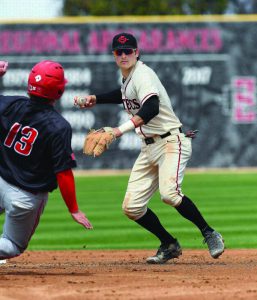 San Diego State’s versatile third baseman and closing pitcher was named the Mountain West Tournament most valuable player, becoming the first Aztecs freshman to earn the distinction and the fifth ever.

With a final scoreboard of 14-5, the Aztecs beat the UNLV Rebels to claim their fifth Mountain West title in six years, sixth overall in the program’s history.

The Chula Vista-born talent has showcased great numbers both at home plate throughout the season, as Schmitt has swung for .273 with 32 RBI.

However, his pitching numbers are even more remarkable. Schmitt boasts an extremely slim 0.28 ERA, the lowest ever in school history with 30 or more innings thrown, and a nation-leading nine saves this season. He also is also in the middle of an impressive clean streak of 25 ⅔ innings without runs allowed.

Schmitt has been integral to SDSU’s success and brings great synergy into the clubhouse, which he shares with follow Eastlake High grads Tre Brown, Julian Escobedo, and Dean Nevarrez.

By laying claim to the Mountain West tournament crown, SDSU earned their ticket to this year’s NCAA Regionals, where they will be facing the LSU Tigers on Friday in their opening game.

A win for San Diego State would be a major boon for the program, as it would mark the program’s first ever appearance at Super Regionals. A win over LSU would also break the Aztecs’ nine-game losing streak against SEC conference team.