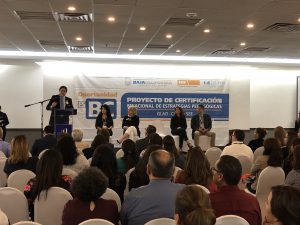 A Binational Certification of Pedagogical Strategies involving education authorities from California and Baja California started with the idea that elementary school students learn to write and speak English and Spanish on both sides of the border.

A total of 30 elementary school teachers from the United States, and 30 professors from Mexico will learn to work with the Guided Language Acquisition Design (GLAD) to strengthen academic performance and the development of techniques in Spanish and English so that students can interact effectively in both languages.

This project is done in coordination between the California Association for Bilingual Education (CABE) and the Baja California State Education System.

“CABE has participated with the California Department of Education and with the Baja California State Education System to try to unite teachers in both sides of the border to keep developing strategies,” said Elodia Ortega, CABE’s president. “Specially in this political times, when is more important than ever before to be leaders in this, and to demonstrate that we can work together to help our families, especially those families with fear, and those students that don’t know where are they from or that go back to Mexico without knowing Spanish or that live in California without knowing English.”

This is the second round of this project. The first generation of certified educators included 20 teachers from both sides of the border. The second generation was received with an event held at the Grand Hotel Tijuana on Tuesday, July 17, with the presence of education authorities of both sides of the border including the Baja California State Education Secretary Miguel Angel Mendoza Gonzalez, among others.

“The GLAD methodology is (meant) to teach teachers how they can educate their students in English and Spanish,” Mendoza said. “Once the school year starts, we are going to supervise this new type of teaching, and we are going to see at the end of the year how the children were really impacted.”
This program is expected to reach to 54,000 foreign students currently residing in Baja California.

“If they are starting to learn English or Spanish, this program will help educators to teach in a more creative and interactive way so children can reach the maximum level of learning,” said Jan Gustafson, CABE’s CEO. “Through this new way of teaching, we try to teach the languages but also to give value to the person that the children symbolizes from wherever part the student is coming from.”

One teacher that is part of the first generation of certified educators through this program was Marcia Munguia Medina, who teaches at Memorial Morse Elementary School in Tecate, Baja California.

“To be able to have these strategies for students that come from the United States or that we think may leave for the United States and to teach them in both languages is something really amazing, and that we should always be able to do. We needed this new guide and this program opened the doors for me to be able to learn this new way,” Munguia Medina said. “By just having these new strategies my classroom changed a lot, now I have more time so we can learn about more subjects and without any fear of using both languages.”

The Chula Vista Elementary School District is an official project collaborator. This district currently has a dual immersion program taught at 22 schools, where students can learn to fluently communicate in English and Spanish.

“The Dual Immersion Program has a lot of success, when our children graduate, they dominate both languages,” said Francisco Escobedo, Chula Vista Elementary School District Superintendent. “Our students not only graduate dominating both languages, they also graduate with one of the highest learning levels that the San Diego County has.”