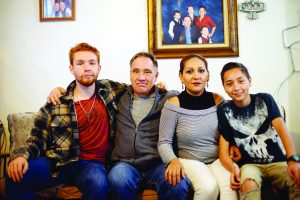 On the day that would change their lived forever, Michael Paulsen and his wife, Emma Sanchez, happily arrived at the U.S. Consulate in Ciudad Juarez, Mexico. They were under the impression that the appointment was to grant Emma legal status; however, when the Visa officer then told Emma was to leave and not return to the United States in 10 years, “it was like the whole world came crumbling down.”

They just could not fathom it. They had been married for 10 years and lived in San Diego. They were raising three American children. Michael was a veteran of the Marines. Moreover, the Consulate had called them in, telling them that it was to give them her legal papers.

Instead, Emma says it was like a paralyzing electrical shock. Michael Paulsen pleaded almost to the point of begging. “Do whatever you want, but your wife will not return to the United States for 10 years,” they were told that afternoon in 2006. It was her penalty for having attempted to enter the U.S. illegally through San Ysidro at some point.

Emma will be back in San Diego no later than Saturday, and her joy seems to make up for the 12-and-a-half-year sanction. “I want to take my kids to school, I don’t care if they’re already teenagers. I want to go back with them to the places we used to go,” she said. “I want to go back to the place where we used to go eat together, I don’t even remember what it was called, but I can picture it in my mind. I want to hug them.”

This past Sunday, Dec. 1, Emma watched them leave Tijuana for San Diego and thought: “This will be the last time I have to watch them leave, go away; it is the last weekend they will have had to come see me in my exile.”

When U.S. authorities first kept Emma from returning, they tried enrolling their children in private schools in Tijuana, since, as foreigners, they could not enroll them in public schools. But the impediments began piling up. They did not have access to preventive care – such as vaccines – because they were foreign; tuition fees were higher, and they had more academic burden than their classmates so they could catch up on the curriculum.

Michael had promised Emma that he’d be back as often as he could. Every other day, at first. But time, fatigue and money took their toll. The long lines to cross back into San Diego on Sundays made things even more difficult.

Michael, who was an active Marine from 1983 to 1987, eventually took the kids back and embarked on a new mission: to play both mom and dad in his children’s day-to-day lives, and then make the long journeys to Tijuana to see his wife who lived in solitude, yearning to return. After four years of this, Michael was diagnosed with a serious illness.

Emma recalls that, sitting by the lighthouse in Playas de Tijuana, she felt an enormous sadness because of everything that was going on. It was then that Yolanda Varona, lead advocate for deported mothers, convinced Emma to tell her story to Pastor Guillermo Navarrete, who had been celebrating a mass at this border location for over 10 years.

In 2010, their discussion gave birth to the idea of Emma and Michael getting married. They were the first couple to be married less than six feet away from the U.S. border, to send a message by the border fence, says Emma.

“For the world to know that a border and a wall and the United States’ immigration policy could not defeat the love that binds us together; for the authorities to know that their punishment which, as was my case, is not just for the individual, because it tortures the whole family, ended up bringing us together, not pushing us apart, and this injustice will now have to be known by legislators.”

Six more years of banishment went by. The couple could not get Emma’s return to San Diego approved, even with the aid of attorneys. They would have to refile after the full 10-year penalty. And even then, there would be hoops to jump through, test to be redone, documents to be corrected.

Finally, on Nov. 23 of this year, immigration authorities told Emma that everything was approved and ready, and all she needed to do now to be able to enter the U.S. once again was to wait for her passport to arrive in the mail.

A week went by, and the passport had not arrived, and Emma’s attorney said the words that have had her “pacing around clicking her heels, dreaming, anxious, making plans,” that her passport and Visa should arrive between Tuesday and Friday, at the latest.

“In a way, I’ve already left,” Emma told La Prensa San Diego as she was sorting what to keep and what to get rid of. Her plan to make up for lost time begins with going back to the same places and doing the same things with her husband, and especially with her children, all of them award and scholarship recipients for their exceptional academic performance.

Now, twelve-and-a-half years later, “my eldest son, Michael Alexander Paulsen, has an Excellence Award signed by President Barack Obama, and was Student of the Year two consecutive years; Ryan Maximillian Paulsen is in the Air Force; and the youngest, Brannon Liam Paulsen, wants to be a musician.

Back when the U.S. government told Emma she could not return to the U.S., her children were five, two, and seven months old. Today they are 17, 15, and 12, respectively.