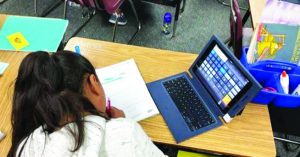 For two years in a row, the 23 K-8 schools of the Escondido Union School District have shown steady progress, according to the State’s new California School Dashboard. Now in its second year, the Dashboard is the state’s accountability system that reports how districts, schools, and student groups are performing across state and local measures. State measures include chronic absenteeism, graduation rate, suspension rate, and academic performance. The academic performance state measure includes performance in English language arts and literacy and mathematics. Academic performance is based on the results of the California Assessment of Student Performance and Progress (CAASPP), a test which students take annually in the Spring. Local measures include clean and safe buildings, school climate, parent engagement, and access to a broad course of study.

Each district and school’s performance is rated using one of five colors, with blue being the highest rating, followed by green, yellow, orange, and red being the lowest performance rating. EUSD students earned a five-point gain in English language arts and a 6.2-point gain in mathematics, moving them from orange to yellow on the Dashboard. The District earned yellow in suspension rates and “providing a healthy, safe and welcoming environment,” and it earned orange in chronic absenteeism. None of Escondido Union’s schools’ academic performance were in the red.

“Every child deserves a quality education, and that is what the Escondido Union School District is determined to provide to every student that walks through our doors,” said Luis Rankins-Ibarra, Escondido Union’s superintendent.

Escondido Union trains its teachers to identify the social and emotional needs of its students, needs that can often complicate and/or prevent learning. The District’s attention to these needs creates an environment where students are ready to learn, rather than being preoccupied with concerns that distract from learning.

“Support for teacher and principal professional development has a lot to do with our progress as a District,” said Leila Sackfield, deputy superintendent of the Escondido Union School District. “The way that our teachers approach the social and emotional needs of the student is critical to improving student achievement, year after year.”

In a District where 79 percent of its 15,767 students are socioeconomically disadvantaged, and almost 43 percent are English-language learners, steadily improving Dashboard scores is a big deal for all of Escondido. “Our kids are the future of Escondido, and it’s our job to prepare them for high school and for the opportunity to excel beyond high school,” said Rankins-Ibarra. “The Dashboard results indicate that our efforts as a District are working, that we still have more work in front of us, but that we’re definitely moving in the right direction.”