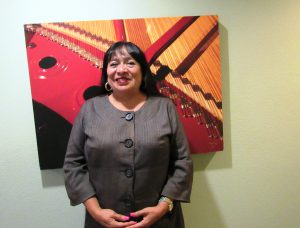 As the executive director of the Center for Social Advocates Estela de los Rios cares about the well-being of the community. She also has a strong sense of justice, which she developed at an early age.

As a human rights activist, de los Rios strives to make the world a better place and doesn’t want others to feel the pain of discrimination, something she herself has faced.

Growing up in rural Brawley, California, she went to a mostly white elementary school where she was taunted for being Mexican. Recalling her past still brings tears to her eyes as she explained how the taunting made her feel like she didn’t belong and that she was nothing as a Mexican.

Then in the 10th grade, she had an epiphany while learning about Rosa Parks. She realized that like Parks, she had to do something to make change happen. Both these incidents shaped her into the person she is today: Someone who fights passionately for the rights of others and can make a difference in other people’s lives through her work at CSA.

CSA is a place where people can come and voice their concerns. It is made up of six agencies that provide community services to East County, including fair housing, immigrant and refugee rights, civic engagement, hate crimes, and human trafficking. It is a place that, in her words, “embraces newcomers and community.”

De los Rios was born in Tepic, Nayarit. When she was five, she moved to Yuma, Arizona with her mom who worked as a housekeeper there. They later moved to Brawley where she finished high school, and enrolled in Imperial Valley College to study psychology. She later switched to sociology because she felt she could do more for society. She went on to graduate from San Diego State University with a degree in sociology.

After college, she worked in Imperial County as a supervisor in the probation department in El Centro. She then married and she and her husband went to San Jose. While living there, she worked for the Santa Clara Housing Authority. However, her marriage was troubled and after they got divorced, she moved to the El Cajon area where she met her second husband and the father of her three children, all girls.

Her second husband worked in El Cajon as a cabinet maker. They stayed together until his death in 2006. Today de los Rios lives alone in El Cajon with her children and grandchildren nearby, but since most of her time is spent working at CSA that is really like her second home.

When she first arrived in El Cajon, she worked as a legal assistant with an attorney whose specialty was inmates’ rights. She also began to volunteer at Heartland Human Relations and Fair Housing which later became CSA. This volunteering led to a part-time job and finally a full-time job as a fair housing counselor and human rights director.

She dealt with all the issues Latinos faced in the East County in the 1980’s when the demographics whiter and racism more overt. At that point, even de los Rios herself thought about moving, especially after her daughter faced verbal abuse and prejudice in high school. However, they stayed put and this strengthened her resolve to fight even more for human rights and against hate.
Her first case as a fair housing counselor was with a Mexican family whose new landlord wanted them to move after he took over from their previous landlord.

Estela helped them by gathering evidence and they won their case in court and were compensated by DFEH, a government agency that works with HUD. This made her feel proud and she wanted to do more to help others in similar situations, especially as demographics were changing and more Latinos were moving to El Cajon.

Together with Pedro Rios, they began to give human rights classes. Her agency also started doing more advocacy for all immigrants as many Middle Easterners were also moving to El Cajon, especially from Iraq.

Today as executive director of CSA, de los Rios has realized that collaborating with other agencies is a powerful tool to fight for the rights of others and she also works closely with License to Freedom, an advocacy group for Middle Easterners, among others. She is well known and respected. In fact, she has been asked to run as a council woman for El Cajon in 2020 and has said yes.

Although close to the age when most people retire, de los Rios is still going full steam. She feels she needs to continue her work, especially in today’s world and all that is going on. There will be a “Stop the Hate” rally on July 17 from 6 to 8 p.m. This will be a free forum at the El Cajon Police Department. She feels she needs to take a leadership position to ensure the ongoing animosity against immigrants and refugees ceases. She wants to shift the negative into positive and change the rhetoric in the communities in East County and San Diego.