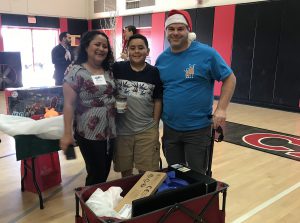 Armando Castañeda, a retired father of three, walked into Castle Park High School’s gymnasium feeling grateful and happy to be able to put some much-needed technology under the Christmas tree this year.

“We don’t have a computer at home, which my kids need for homework, so they will be happy to see it this Christmas,” Castañeda said softly.

Castañeda heads one of the 20 preselected families with teenagers to receive tech devices from Computers 2 Kids San Diego and Cox Communications, in conjunction with nonprofit South Bay Community Services (SBCS). This giveaway gave away a refurbished computer and laptop to each family, as well as a discounted internet access plan.

The families benefited were referred through SBCS’s many community programs. As Mauricio Torre of SBCS explained, program directors and coordinators who work with the benefited families helped select these.

“We provide services to many families and we run a wide range if programs, so that’s where we find the families which, otherwise, wouldn’t have this support,” he said.

While the image of teenagers being glued to a screen may be prevalent, the Pew Research Center reports taught nearly 20 percent of teenagers aren’t able to finish school assignments due to a lack of internet access or even computing devices. This phenomenon mostly affects lower-income students.

“When you look at homework assignments nowadays, a lot of assignments not only need access to a computer, but access to the internet and if students do not have this access and tools they will be a step behind,” Torre stated.

The computers and laptops handed out by Computers 2 Kids, San Diego as a part of this event were all collected through community donations. Each device is fully refurbished, sanitized and prepared with a Windows operating system and a suite of programs and tools for students. The total price of the giveaway items, including software suites and licenses, is calculated to be worth $56,950.

Cox Communications’ discounted high-speed internet rates for these families is being provided through its Connect2Compete initiative, which is provided to qualifying families with students in grades K-12.

Selected families also received a package with food items, children’s toys, and other basic items donated by a community church.