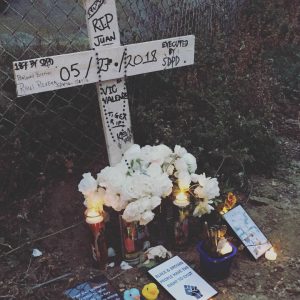 No one will ever know what Raul Rivera was thinking on the night he walked in and out of ongoing traffic on Tocayo Avenue and Hollister Street in the community of Nestor back in May of this year. No one will know what he was feeling before he was surrounded by police officers, or his final thoughts when guns were drawn, pointed at him, or why he allegedly refused to let go of a knife before he was fatally shot down.

The shooting has left unanswered questions for the Rivera family about whether excessive force was used by police, along with their belief that more could have been done to help Rivera calm down and prevent his death.

A video uploaded to YouTube contains disturbing images of a man believed to be Rivera pacing erratically before he is shot multiple times.

Those images add pain to an already devastating memory of the final moments of the life of a family member who struggled with mental illness and lived a traumatic life.

“Raul never had a chance to thrive in this world,” said Bri Rivera, niece of 42-year-old Raul. Raul was one of five brothers and sisters who all had rough upbringings. Raul’s father neglected all the children and their mothers.
It’s unclear what happened to Raul’s mother, as she was not a part of his life.

Aware of past mistakes in raising his children, Raul’s father insisted on raising Raul himself, telling the family he wanted to do right by his son.

But Raul’s father was never able to keep the promise of giving Raul a better life. When Raul was between the ages of 5 and 6, her grandmother pleaded with his father to allow Raul to live with her, but his father didn’t allow it.

Under the care of his father Raul spent his childhood living in different places, constantly neglected by his father who would sometimes leave him with family, sometimes with neighbors, and sometimes alone with strangers – making Raul vulnerable to abuse at a very young age.

Raul’s father battled with alcoholism and was abused physically by his own father, and he ran away from home at the age of 12 and lived on the streets until he was about 16 when he joined the military.

Raul’s mental illness became evident in his teenage years. His family noticed erratic behavior, and he started making decisions which eventually landed him in the juvenile justice system and set him on course for incarceration throughout different points in his life.

Bri said she is not aware her uncle ever received treatment for his mental illness, which also led to his struggles with drugs and alcohol.

The National Institute of Mental Health reports while mental illness affects tens of millions of Americans each year, only about half receive any treatment. A study from 2017 appearing in JAMA Psychiatry also found poor communities have few options for mental health care.

Bri said a detective told her family hours before the shooting that Raul was suicidal when he was stopped by officers, but he was let go. A different uncle of hers who had made plans to take Raul out to celebrate his recent birthday, said Raul was acting irregular earlier in the day.

The San Diego Police Department confirmed an investigation is underway. A statement from the police department indicated that Rivera was ordered by officers several times to drop the knife. When he refused, less lethal weapons of bean bags and a taser were used, but were not effective. When Rivera moved toward the officers with the knife pointed at them, he was shot.

A married couple who witnessed the incident and spoke to the San Diego Union-Tribune seemed to agree with police that Rivera ignored orders to put the knife down.

But another witness disputed the police account, saying police told Raul to get on the ground. Then the police just started shooting, adding that so many shots were fired, “it was like the Fourth of July,” Tiger Wicks told the Union-Tribune.

Raul Rivera’s death has made headlines in San Diego, but it’s not the only one. Others include Jonathan Coronel, who was fatally shot by police in July of last year, and Sergio Weick also fatally shot by police in August, 2016. The San Diego County District Attorney’s Office ruled Weick’s shooting was justified and recently said that deadly force was reasonable in the case of Coronel.

There is also Earl McNeil, whose death has also sparked outrage and calls for transparency in National City. McNeil died after being arrested in May of this year suffering severe brain damage while in custody of police. This week the medical examiner provided preliminary findings of the investigation to McNeil’s family, which have not been released to the public, but a full report is expected to be released in mid-August.

Raul’s story is also not an isolated one. A study from 2015 from the Treatment Advocacy Center found individuals with untreated severe mental illness are involved in at least one in four, and as many as half of all fatal police shootings.
The ACLU said many of these deaths could have been prevented if police were held to a higher standard that valued the preservation of life. 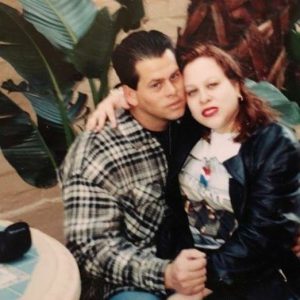 If passed, the bill would require officers to use deadly force only when it’s “necessary” to stop an imminent threat and only when attempts to de-escalate the situation with non lethal tactics haven’t worked.

At a press conference back in April announcing The Police Accountability and Community Protection Act, Assemblymember Weber stated, “At times, the use of deadly force is used at a terrible cost to all that’s involved.”

“My uncle’s voice was stolen from us, but my uncle’s story is not going to be stolen. I am now that voice and that story, and I take it as a responsibility to wake up to tell that story because he doesn’t get to,” Bri explained.

Raul Rivera’s family is organizing a Justice 4 Raul Rivera march and rally on Sunday, July 29, 2018, at 10:00 a.m. at the intersection of Tocayo Avenue & Hollister Street, San Diego, CA 92154. The march will end at the San Diego Police Department Southern Division station on 27th Street where the rally will take place.