Fandango Fronterizo Once Again Brings People Together Across Border 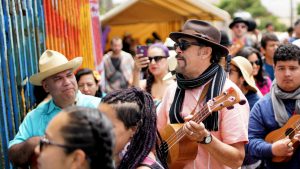 This past weekend, dozens of son jarocho musicians and hundreds of spectators gathered alongside the border at Friendship Park and directly across it in Tijuana to play and enjoy music together as if the wall did not exist.

“We know (the wall) is there,” said Fandango Fronterizo organizer Jorge Castillo during the festivities, now on their 12th year, “but we have our own elegant way of ignoring it, of hosting our fandango and celebration, showing the wall that it does not matter to us, that what we have is greater and more beautiful.”

Border Patrol did not restrict the event this year, allowing all the musicians to come together and exchange musical verses across the fence. Last year, they only allowed people to approach the fence 10 at a time, and for a limited time.

“This time, they said they already knew us and that our artistic program has never caused any conflicts, so they decided on their own to let everyone on the U.S. side come up,” shared Castillo.

The verses being sung spoke of the wall that divides us, and although they made no political statements, they did lament that the barrier keeps people from being able to see each other and reach out across the border to touch someone, now impeded by the tight metal mesh in place at the park. 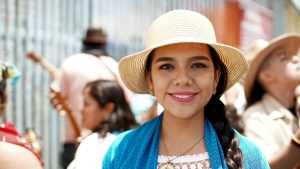 “I would love for this world to have no divisions; as this separation causes me deep pain, I’d love for the world, for even a minute, to be free, and for our neighbor to know we are all one same home, and that, like the sea, we knew no borders,” expressed Evelyn Acosta from Tijuana’s jarocho music and dance workshop, during one of her songs.

Castillo told La Prensa San Diego that there is a jarocho musician community split by the border between San Diego and Tijuana who for a long time wanted to play together. So, 12 years ago they decided that Friendship Park and the Tijuana Beach lighthouse across the border was the ideal place to host the festival, because there is enough space to host them on either side so they can come together – with the obvious limitations – and talk to each other through song and verse.

“Let’s get together, even if there’s a wall there, and let’s have a party, a fandango, and not let anything stop us,” Castillo remembers saying to his fellow musicians.

The result has been a cultural festival that attracts a growing number of people year after year.

Son jarocho is the traditional folk music for the south of the coastal state of Veracruz, on the Gulf of Mexico, and musicians from the region are invited to Fandango Fronterizo every year to play and share with border locals.

The full festival generally lasts for four days, from Thursday to Sunday, and includes classic son jarocho dance classes, music, and traditional garb. The cross-border portion is celebrated on Saturday every year in late Spring.