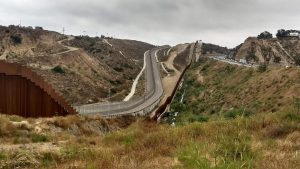 The San Diego American Civil Liberties Union (ACLU) has confirmed that a California federal court issued a preliminary injunction against reallocating Pentagon funds for the purpose of building the border wall. President Trump, however, has already said he will appeal the decision.

The federal court’s decision to grant the ACLU, Sierra Club and the Southern border Communities Coalition an injunction is a provisional step until such time as the plaintiffs and the Trump Administration appear before a different court venue to definitively resolve the matter.

According to the ACLU, the decision halts any potential construction of the border wall already announced by the Administration.

The court accepted the collective argument that the Trump Administration had acted illegally when it ignored the decision by Congress to decline to grant funding for the wall.

“Congress’s ‘absolute’ control over federal expenditure, even when that control may frustrate the desires of the Executive Branch regarding initiatives it views as important” wrote Judge Haywood Gilliam in his decision, is not a bug in our constitutional system. It is a feature of that system, and an essential one.”

“This order is a win for our system of checks and balances, the rule of law, and border communities,” said the ACLU. “The court blocked all the wall projects currently slated for immediate construction. If the administration begins illegally diverting additional military funds, we’ll be back in court.”

The decision took effect last Friday night, just before construction was slated to start – on Saturday – on two sections of the wall: 46 miles along the New Mexico border, and a short, 5-mile section around Yuma, Arizona.

The court, however, rejected the petition filed by the State of California on behalf of 20 state governments to make the Administration return funds diverted from other areas of the budget to the construction of the border wall.

President Trump had made a move to fund the wall by emergency declaration after nearly two years since his Executive Order, in January of 2017, to immediately begin construction.

The Declaration came after the November elections, when Democrats obtained a majority in the House, as well as after an unprecedented government shutdown that lasted over a month.

When Congress declined the funding, the President declared a National Emergency in order to transfer funding anyway and finally begin construction.

Now, after the court’s decision, the wall will remain on hold, 28 months after Trump issued his Executive Order to proceed immediately begin construction.

The Chief Executive did, however, respond with one of his customary tweets saying his Administration would appeal the California court’s decision, calling the judge “another activist Obama appointed judge” and that his ruling was “in favor of crime, drugs, and human trafficking.”