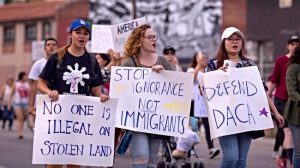 The Ninth Circuit Court of Appeals on Thursday upheld California’s so-called “Sanctuary” law that allows the State and cities to limit their cooperation with federal immigration agencies.

Senate Bill 54, which took effect in 2018, allows local authorities to withhold immigration status information from federal agencies, a move that President Trump has argued violated federal law. Trump has tried to withhold federal funding in retaliation for the State’s refusal to cooperate with ICE and Border Patrol in deporting known undocumented immigrants.

“We continue to prove in California that the rule of law not only stands for something but that people cannot act outside of it, said California Attorney General Xavier Becerra after the ruling.

A three judge panel of the Ninth Circuit Court of Appeal voted unanimously that SB 54 does not violate federal law even though it may make it more difficult for immigration agencies to deport undocumented immigrants.

The Trump Administration filed the lawsuit claiming the US Constitution allows the federal government to enforce immigration laws and that states could not block or impede federal agencies.

Cities, counties, and the State have argued that their local law enforcement agencies should not be used to enforce federal immigration laws, and that their refusal to cooperate did not stop federal agencies from conducting their own work.

“The Ninth Circuit ruled in our favor today, demonstrating that the rights of states and the 10th Amendment continue to thrive,” Attorney General Becerra added.

The three Justices also acknowledged that “SB 54 makes the jobs of federal immigration authorities more difficult” but that California has the right to “refrain from assisting with federal efforts” to enforce immigration laws.

This week’s decision upheld a lower court’s ruling that SB 54 did not violate federal law. The Trump Administration could now appeal to the full bench of the Ninth Circuit Court, and then, if necessary, to the US Supreme Court.

Trump has long criticized the Ninth Circuit Court as “disgraceful”, although he has already appointed three justices to the Court, and two more nominations to the Court are pending final approval by the US Senate.

Just last week, the Court ruled in Trump’s favor when it reversed a lower federal court ruling that blocked Trump’s policy to return asylum seekers back to Mexico during their review process.