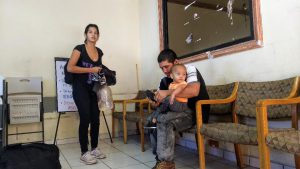 As the most recent migrant caravan is just getting to Mexico City, one of the families among them rushed ahead for humanitarian reasons and has now crossed into San Diego seeking asylum.

The family explained to La Prensa San Diego that, towards the end of 2018, they decided to risk trying to get to the United States to get urgent care for their youngest son, who has hydrocephalus – a condition that causes fluid buildup in the brain – and for whom Honduran doctors had said there was nothing more they could do.

Magda, the 21-year-old mother of the baby and his 3-year-old sister, said that doctors in the Honduran city of San Pedro Sula had initially tried to hide her newborn son’s condition, however, at one of the appointments he ended up having to be admitted for surgery to place a shunt in his brain.

The shunt ended up shifting out of place and he had to undergo a second surgery, but the doctors still felt his chances were slim.

“My husband barely made enough to buy food, let alone medications,” said Magda tearfully, “then while talking sometime around Christmas we decided to come looking for help. My husband used to say that maybe God would put angels in our path.”

On January 15th, they left with the caravan that was organized through social media and a few flyers that were handed out in San Pedro Sula. About 1,000 people left San Pedro Sula, and by the time the caravan reached the Mexican border it was about 3,000-strong.

“We had gotten to Ciudad Hidalgo, Mexico, and an officer who was walking by saw us and said that my son should not be waiting in the sun, so he called for a pickup truck that took us to get a humanitarian permit in Tapachula, [Mexico,]” said the father, 22-year-old Jonathan Eduardo Garcia Robles.

Hours later, a stranger noticed the baby’s condition and bought bus tickets for the whole family: Jonathan and Magda, their children, and Magda’s sister, Yoli, who is 24, expecting twins and had to leave two other children behind in Honduras to go in search of work.

Yoli shared that she worked and shared a place with her sister and brother-in-law. Together, they paid $1,800 lempiras (about $73 dollars) a month in rent, but in order to afford even that, she said “we had to live in dangerous neighborhoods, because if me moved elsewhere we would have to pay four or five times that, and we had no way to make more money.”

Jonathan recalled that the stranger in Tapachula “covered the $1,800-peso fare for each of us, from Tapachula to Tijuana.” He also stressed how “help from above” continued to come their way after getting to Tijuana. The bus arrived at 5 a.m. on Saturday, and “a gentleman told us we had to go El Barretal, said Jonathan, “but we didn’t even know where we were.”

To his surprise, the man then called for a cab, paid in advance to have them taken to El Barretal – the temporary shelter provided by the Mexican government for migrants in Tijuana – and, according to Magda, even came up to the baby and left $150 pesos between his blankets.

Once at El Barretal, Federal officers informed the Beta Group (federal immigration protection entity in Mexico), who in turn contacted U.S. authorities at PedWest to procure moving the family to the “front of the line” to enter seeking asylum for humanitarian reasons.

The response from Customs and Border Protection (CBP) was received at around 11 a.m., and by noon a member of the Beta Group was picking up the family to drive them to the border so they could turn themselves in for their asylum petition.

Before 1 p.m., the family was seen entering the PedWest facility. Those who caught a glimpse of them said they seemed happy and hopeful as they stepped into U.S. soil.