First Section of Border Fence Between California and Mexico Completed 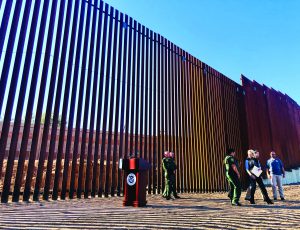 Homeland Security Secretary Kirstjen Nielsen visited the border region between Calexico, California and Mexicali, Mexico this week to unveil the first, two-mile section of the border fence.
One feature of the new wall that is immediately apparent is that is much taller than the fence that went up in the nineties. Another feature, which was a request by border enforcement agencies, is that there is a space between the 30-foot high bollards (twice as high as the wall it replaces) allows visibility of what is happening on the other side of the border.

This is the same model currently being installed along 14 miles between San Diego and Tijuana.

“Walls work,” said Nielsen during her speech, accompanied by Commissioner of U.S. Customs and Border Protection Kevin McAleenan and Gloria Chavez, Chief of the El Centro Sector Border Patrol. “That’s not an opinion, it’s not a tagline, it’s not a political statement—it’s a fact.”

When questioned by the press as to whether this construction in Calexico is an actual wall, as promised by President Trump, or just a fence, the Secretary insisted that “to me, this looks like a wall.”

“It is different than a fence in that it is part of a full wall system,” said Nielsen, referring to the fact that the new structure is part of a broader security strategy that will include additional technology and personnel.

Two construction workers placed a commemorative plaque on one of the countless beams, with the names of President Donald Trump, as well as that of Secretary Nielsen and other officials involved in the project.

Many human rights advocates have stated that this was an already-slated replacement of an existing fence between California and Mexico, and not Trump’s promised border wall, to which a Border Patrol spokesperson replied that while the $18-million-dollar project was approved and funded during Obama’s Administration, the design and construction happened under the current one.

Chavez echoed the effectiveness of the wall. She even declared, without providing specific numbers, that since the construction of the new wall, the number of illegal crossing has decreased “significantly.”

In this section, located steps away from the border crossing and a prominent shopping center, there is a high incidence of assaults on border agents, said Chavez.

“These two miles of border are critical for us here in Calexico,” she said. “This area is where we used to arrest most Indian nationals, over 3,000 people,” adding that “this has stopped happening since the wall was completed.”