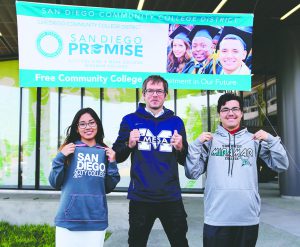 The deadline for a free tuition program aimed at first-time community college students is fast approaching.

Eligible applicants must be first-time college students who have been enrolled at a California high school for at least three school years.
Applicants must also have received their high school diploma after June 2017, enroll in at least 12 units of academic coursework, and must have completed a FAFSA or Dream Act form.

As part of the current application period, over 2,000 students have already signed up for this program.

Lynn Neault, SDCCD Student Services vice chancellor, recommends students interested in the program fill out their applications without delay, and prior to the August 3 deadline.

“We want students to fill out a San Diego Promise interest form by August 3 so they will have plenty of time to apply for admission at either City, Mesa, or Miramar colleges, meet with a counselor to develop their education plan, and take part in a campus Promise orientation before classes begin August 20,” she said.

Due to already high enrollment numbers across California community colleges, including those in the SDCCD system, incoming applicants who need to enroll in the required 12 units of schoolwork are advised to apply to the program and select classes though program counselors as soon as possible.

The San Diego Promise Project began during the 2016-2017 academic year as a pilot program. In its first year, the program extended its tuition assistance to 201 students, of which 175 were recent high school graduates and 26 were continuing education students at SDCCU campuses. During the 2017-2018 year the program included 661 students across the three SDCCD campuses.

With over 2,000 students enrolled in the program, costs are estimated to be $1.86 million, of which first year enrollment costs will be provided by an allocation from the State budget and the second year of enrollment being underwritten from money raised by SDCCD through a fundraiser campaign.