Over 1,000 City of San Diego employees were moved into the 101 Ash Street building in December 2019 and January 2020 without final building inspections that would have required that all of the fire life safety equipment be certified to be working, and after City leaders were warned by the general contractor that the systems were not operable, but City staff then misrepresented the building status to the press, the public, and even the San Diego Ethics Commission.

The building, which served as the corporate headquaters of San Diego Gas & Electric and later its parent company Sempra Energy for more than 45 years, was leased by the City in January 2017 under a 20-year lease-to-own agreement, then the City spent more than $30 million in renovations before the building was ultimately abandoned in late January 2020 due to asbestos exposure.

According to the San Diego Development Services Department’s own internal documents, final permits for the 19-story building were not approved even though several individual floors passed partial inspections. Since individual floors do not have independent heating, vent, and air conditioning (HVAC), fire, and other systems that can be segmented or controlled independently, final inspections cannot be issued on a floor-by-floor basis. As of this week, the building has still not passed final inspections.

Top City staffers continued to push the general contractor to move forward with approvals even though the critical fire life safety systems were not working.

“As you were previously informed, the City has coordinated with [Development Services Department] Fire Inspection staff regarding the existing inoperable fire dampers that are without a safety shutoff switch on the upper floors,” Myrna Dayton, Assistant Director and Chief Deputy City Engineer Public Works, wrote to the general contractor, acknowledging she knew the fire dampers were not working even though they are an integral part of the building’s fire life safety systems.

Top City staff were put on notice when they received an email from David Davey, President of West Coast General Contractors, the lead company on the renovation project, clearly outlining that the fire systems were not operable and that final inspections could not be completed.

“The inspector also stated a “fire watch” could not be used as a temporary substitute for a building of this size with an infrastructure as inoperable as the Ash Street building,” Davey wrote on December 6, 2019. “Consequently, the idea that ‘[i]t was determined since there have been no changes to the existing air volume or existing fire dampers, all that is required would be that the fire alarm system for each floor is operable’ belies the fact the ‘existing fire dampers’ are NOT integrated (nor operable via a controls system) with the fire alarm system as noted by a multitude of people over the course of the project – including City staff and the Fire Life Safety inspector last week – no fire alarm for any floor can be completed until the entire infrastructure is repaired, replaced, and/or operational.”

The general contractor also complained that “political pressure” was driving the timeline to move into the building that wasn’t yet safe to occupy.

“The inspector stated all systems integral with the fire alarm system would need to be functional before he would perform any final inspection. He indicated the MEP systems, fire sprinklers, smoke dampers, flow switches, etc. that are integral to the fire alarm system typically controlled by a Building Automation System must be completed before final inspection and occupancy,” Davey wrote. “It is understood the City is under significant political pressure to meet what are noncontract-imposed milestones.”

At the time of Davey’s email, the building automation system (BAS) was not functional and could not control major components of the fire life safety systems. One of those components, the vent dampers which are supposed to close on floors near a fire to stop air from feeding the flames, were bolted open and could not close at all, leaving a major part of the fire system inoperable.

The following week, Nagelvoort emailed Davey a letter written on behalf of Davey back to Nagelvoort himself declaring that the building is “safe for City employees and the public to occupy”, seemingly forcing the contractor to give the City clearance as to asbestos testing but failing to mention the fire life safety issues. The letter was later used by the City to respond to questions from the San Diego Union-Tribune with respect to the status of the building. 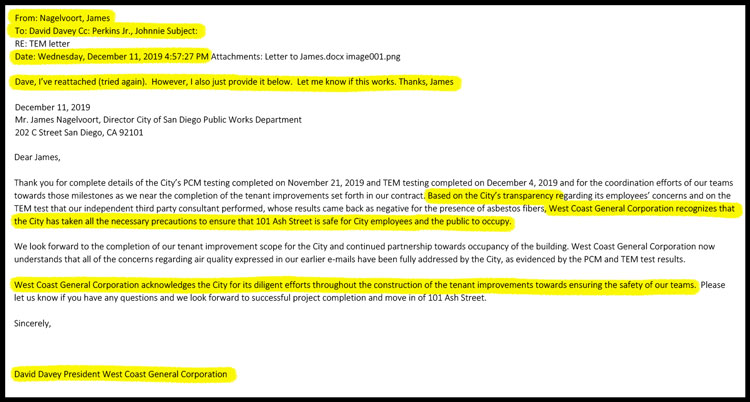 The building was then occupied by City staff beginning on December 17, 2019, without any work having been completed to repair or replace the inoperable fire systems and without passing final building inspections . More staff moved into the building in January 2020 when a total of more than 1,000 staffers completed the move.

Within days of moving in, employees began complaining of extremely cold temperatures in the building when the air conditioning and heating systems were not working, making office spaces unbearably cold. In one email on December 27, 2019, staffer Elvia Sandoval of the Office of ADA Compliance wrote to the Municipal Employees Association union to share her concerns and mentioned the fact that the HVAC system wasn’t working.

“The temperature inside the offices are very cold and almost as cold as outside. We are wearing many layers of clothing, our jackets, beanies, gloves, and blankets to try to keep warm,” Sandoval wrote. “We are told by [Real Estate Assets Department] that they are still working on balancing the system but don’t know how long that will take. However, we got a little inside scoop (can’t say from who) that the cooling/heating system is in need of major repairs because the pipes are leaking and the heat can’t make it to the offices suites and the cost to repair or install something else would be astronomical.”

A union official responded that the MEA offices were closed until January 2nd but that the message was sent to two union reps that “may be able to respond.” It’s not clear if the union contacted anyone at the City to investigate the temperature issues.

Schaar also informed Villa that heaters throughout the building could not be used because the BAS was not operable and repairs to the system were not included in the project.

“We have @900 fan coils around the building up against the windows, but not in the interior,” Schaar wrote in his December 30, 2019, email. “Although, these fan coils cannot operate without the BAS system which is currently not operational and not part of our contract.” 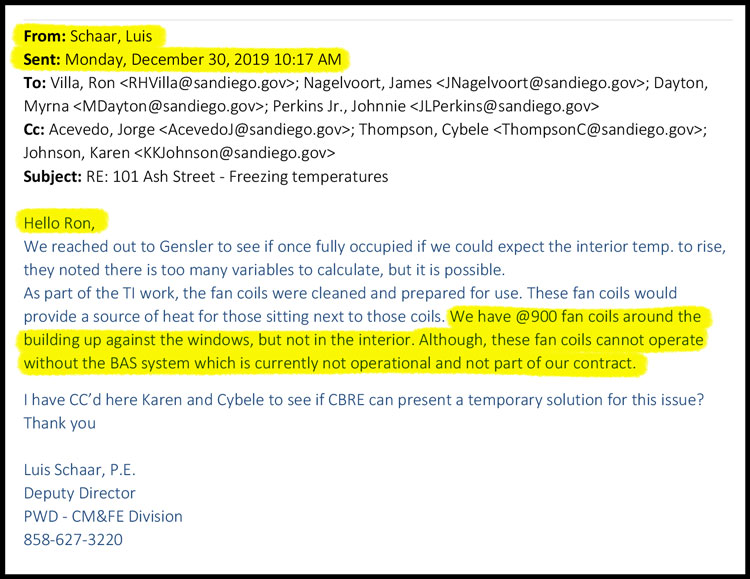 But concerns over heating were not the only threat to employees.

On January 13, 2020, City Ethics Commission Executive Director Stacey Fulhorst emailed City Chief Operating Officer Kris Michell, Assistant COO Ron Villa, and Deputy COO Johnnie Perkins in reaction to an article in the San Diego Union-Tribune that raised concerns over “previously undisclosed violations concerning asbestos abatement at 101 Ash.” Fulhourst and other Ethics Commission staff had previously been evacuated from another City building due to asbestos exposure and had recently been moved into the 5th Floor of the 101 Ash St. building.

“Has a Certificate of Occupancy been issued for the 5th floor?,” Fulhorst asked.

In preparing a response to Fulhorst, several City staffers provided answers to DCOO Johnnie Perkins. The response to the question about a certificate of occupancy was assigned to Karen Johnson, Asset Manager for the Real Estate Assets Department.

“[T]here was no Certificate of Occupancy issued for the building. The building was never completely vacant and therefore did not require one,” Johnson wrote. “Having said that, all work was inspected and approved per code including fire life safety inspections.”

James Nagelvoort, Director of Public Works, also offered Perkins another response to the issue of inspections.

“If they keeping asking for a Certificate of Occupancy, as an alternative we could give them the listing of all of the Build inspections (plumbing, electrical, fire sprinklers, fire alarm, hvac,…) for either the entire building or just the 5th floor,” he wrote. Nagelvoort is a licensed Professional Engineer.

But, according to the City’s own internal database, final inspections had not been performed at the time of those emails, and even some partial inspections had either been cancelled or failed. It is not clear from emails released from the City where Johnson and Nagelvoort received the information they relayed to Perkins, but it is clear the information was not accurate. Nagelvoort had previously received the email from the general contractor stating that the fire systems were not operable.

For example, in an email exchange in early December 2019 between staffers preparing to move employees into the building, questions were asked about inspections and receiving “thumbs up for the first phase move in floors”.

“Johnnie [Perkins] and James [Nagelvoort] are hoping to get your thumbs up for the first phase move in floors, based on the inspections yesterday,” wrote Julie Ballesteros, Public Works Assistant Deputy Director, to Kelly Charles, Assistant Deputy Director, Building Construction and Safety Division within the City’s Development Services Department on December 16, 2019.

The inspections referred to those conducted by Senior Electrical Inspector David Rundell of the fire alarm system, which is only one part of the fire life safety system that must all work together to combat fires.

“All finished, floors 4, 5, 9, 10, 11 and 17 “Fire Alarm safe for use”. I will fill you in tomorrow with the situation here,” Rundell emailed his supervisor, Martin Montessoro.

Rundell’s inspection did not included a review of fire dampers, control systems, sprinklers, and other components of the fire life safety system.

During the rest of December 2019 and early January 2020, more employees were moved into the building without any warnings that the fire life safety systems were not operational.

Despite all of the issues related to the project, Deputy COO Johnnie Perkins sent an appreciative email to James Nagelvoort on December 19, 2019, commending Nagelvoort on his leadership, saying he “surpassed the highest standards and expectations”, and thanking his key staff on the success of the project.

But on January 14, 2020, the County Air Pollution Control District again found traces of asbestos and issued another violation letter to the City. The building was declared a “Public Nuisance” and notices were posted at the entrances to the building warning of exposure to asbestos.

At that point, City leaders decided to evacuate the building in response to the asbestos, but no emails have been released from the City that show any discussions about the inoperable fire systems being a reason for leaving the building.

On January 17, 2020, Chief Operating Officer Kris Michell announced that the “City leadership has decided to temporarily relocate employees from the building in an abundance of caution” and that staff had to be out of the building by the next day. No mention of concerns over the non-functional fire life systems were included in the memo.

The building was completely vacated by staff as of January 18, 2020, and has remained empty ever since. To date, no final inspections have been completed and the fire life safety systems remain inoperable.

Two insurance lawyers explained to La Prensa San Diego that, in the case of a fire, it is likely insurance companies would refuse to cover losses because the City was aware fire systems were nonfunctional, disactiviated, and/or altered, leaving the building at higher risk of catastrophic fire damage and potential hazard to occupants. To date, neither the City nor Cisterra, its landlord, have taken any “self-help” actions to mitigate the heightened fire hazard due to the inoperable systems.

La Prensa San Diego has reached out by phone and emails to several City staff for comment, but all responses have said they cannot comment due to pending litigation.

Emails to Cisterra Development have not been answered.