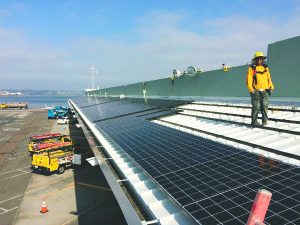 A new effort to unite the fight to save the planet and end economic inequality is launching in San Diego under a Green New Deal.

“The Green New Deal is a framework at this point for thinking about how we address climate change, while also ensuring a just transition for people working in the fossil fuel industry, and while addressing environmental injustice and income inequality,” said Stephanie Corkran of SanDiego350, a volunteer organization focused on preventing the worst impacts of climate change.

“But we feel there is no time for delay in considering a Green New Deal because of the urgency of the climate crisis, and with the severity of income inequality and abject poverty that exists among our people,” Corkran added.
Last year, the U.N.’s Intergovernmental Panel on Climate Change warned that the world is quickly running out of time to stop the negative effects of greenhouse gas emissions.

Congresswoman Alexandria Ocasio-Cortez, the youngest woman elected to Congress, is a champion of the Green New Deal and one of more than 45 Congressional representatives that support the plan along with hundreds of organizations.

“This is going to be the New Deal, the Great Society, the moon shot, the civil-rights movement of our generation,” Ocasio-Cortez said about the Green New Deal at a town hall last December.

Supporters of a Green New Deal hope to see legislation eventually pass in Congress, but a lot of work still needs to be done and a number of reports say changes would also be required including Democrats winning the White House in 2020, retaining control of the House of Representatives and also winning the Senate.

The plan includes moving to 100 percent clean renewable energy by 2035, and phasing out all fossil fuels (including transit) as Corkran explained.

“Pass a national jobs guarantee, creating good jobs with collective bargaining and family-sustaining wages. Economically disadvantaged communities would be prioritized for jobs and infrastructure development, and would be involved in the planning process from the start,” Corkran also said explaining what the Green New Deal is about adding, “The rights of those from Indigenous communities would be given equal weight in decision making and planning.”

A recent article in the magazine The Atlantic says the single most crucial aspect of the Green New Deal is its proposed job guarantee, a controversial policy that says that every American can have a job with the government if they want one.

The report from the Atlantic also said Data for Progress, a leftist advocacy group, claims that the Green New Deal could generate 10 million new jobs across the country over 10 years.

Corkran said the Green New Deal could benefit the region in a number of ways. It would facilitate San Diego meeting its already established Climate Action Plan goals, and SANDAG to achieve greenhouse gas reduction targets. Many of a Green New Deal’s goals tie in nicely with the push for Community Choice Energy in San Diego.

It could also make major changes to the region’s public transit system along with improvements to those who don’t have access to efficient and affordable transit.

“We know that California has 8 of of 10 cities with the worst air pollution in the country (and San Diego’s air pollution is severe). Many economically disadvantaged, environmental justice communities suffer the brunt of the health effects as they are located near highways, near power plants, etc. Rates of asthma in children in these communities are high, as well as other respiratory diseases. With a focus on public transit (and clean energy generation) air quality would improve,” Corkran also said.

A week of nationwide action to deliver petitions targeting San Diego members of Congress to support a Green New Deal has been planned for the week of February 4-8 by SanDiego350, who is also looking for volunteers with new ideas and anyone who speaks Spanish or is bilingual or bicultural.

Other participating organizations include the Sunrise Movement, the Center for Biological Diversity, Friends of the Earth, Food and Water Watch and Greenpeace.

‘We need everyone to get involved! Everyone has something they can contribute. These issues impact everyone. It will take all of us collectively rolling up our sleeves and working on these issues together to create a sustainable and just world,” Corkran also said.