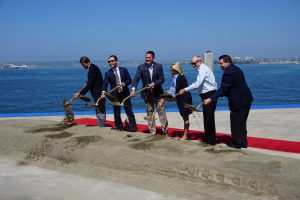 Were it not for the project renderings of the development project on the North Embarcadero waterfront, it would be difficult to imagine what the water-adjacent space will become in the next year.

This iconic location, previously held by Anthony’s Fish Grotto, will be transformed into a two-story restaurant facility with a perimeter walkway and a viewing deck.

The Port of San Diego and the Brigantine, Inc. held a groundbreaking ceremony Tuesday morning to mark the start of construction of the waterfront restaurant site, Portside Pier.

The restaurants options at the Portside Pier will include Brigantine on the Bay, Miguel’s Cocina, Ketch Grill & Taps, and Portside Gelato and Coffee.

Aside from the dining experiences, the Portside Pier will also have free public access to those who want to enjoy the views the San Diego Bay has to offer.

The project construction is expected to begin next week and could take 16 months to complete.

According to Board of Port Commissioners Chairman Rafael Castellanos, the project is expected to generate more than $1.1 million in annual rent to the Port of San Diego.

“This is what we call San Diego’s front porch so when the big cruise ships come in this is the first thing they see, so it’s going to be a flagship project that will really be world class,” Castellanos said to La Prensa San Diego.

Castellanos said that when the Port began to see what restaurant developers could do with the space, the Portside Pier is exactly what they had in mind. 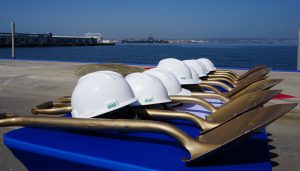 In 2017, the lease held by Anthony’s Fish Grotto – a popular seafood spot that had been on the North Embarcadero location for 52 years – expired and was not renewed by the Port.

According to a Port press release, following a competitive public process, the Port selected the Brigantine’s Portside Pier restaurant development in an effort to promote quality development.

The Brigantine, Inc. is a San Diego restaurant company that owns and operates restaurants like Brigantine Seafood and Oyster Bar, Miguel’s Cocina, and Ketch Grill and Taps.

Mike Morton, president and CEO of the Brigantine, Inc., said this project is the largest and first over the water project for the restaurant company.

“Standing here today, I really don’t think we could have dreamed of a nicer location,” Morton said.

Morton said the waterfront restaurants will add approximately 250 jobs to the site alone.