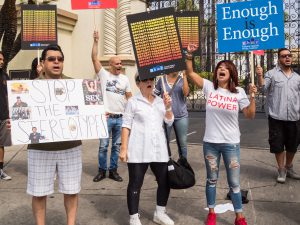 Filmmaker and writer Guillermo “Memo” Grajeda has been writing since he was 11 years old.

“I really loved reading old movie scripts that I found at the library and wanted to try it for myself,” Grajeda said.

Now in the Hollywood industry for five years, Grajeda added, “It has been significantly challenging getting opportunities in Hollywood.”

“It gets pretty soul crushing when the ideas and screenplays you’ve been mulling over for months get turned down in an instant. The worst thing from all of that is if you do get a job opportunity, it’s for a racist joke of a show that has Mexicans and immigrants as demonized villains that portray every stereotype in the book,” Grajeda explained.

Just days ago, a number of Latinos leaders and supporters protested in front of Paramount Pictures in Hollywood over the lack of hiring Latinos by the entertainment giant both on and behind the big screen.

The protest was organized by the National Hispanic Media Coalition (NHMC) and the National Latino Media Council (NLMC).

The campaign is part of NHMC’s ongoing efforts to increase positive media portrayals of Latinos and increase Latino employment in media. The protest is said to be the first of a series of demonstrations against film studios that have a poor record of Latino employment.

Upcoming films by Paramount Pictures and release dates include, Nobody’s Fool on Nov. 2, Overlord on Nov. 9, Bumblebee on Dec. 21, and several 2019 titles.

Alex Nogales, the president and Chief Executive Officer of the National Hispanic Media Coalition, explained the reason for the protest, “Not a day goes by without an attack on our Latino community by the President and his minions. They don’t know us and see little, if anything, of us in film and television, film in particular.”

“We’re absent, invisible, and because Trump talks about Latinos and immigrants in the worst of terms, branding us criminals, rapists, polluters of American culture – his supporters believe him and act on his words,” Nogales added.

“Until Latinos are given the opportunity to tell our own stories, to write, direct, and act in all film, television, and streaming media produced by Hollywood, we will continue to be stereotyped, talked about, and treated in the worst of ways as we are being treated presently,” Nogales also said.

NHMC, with the help and cooperation of UCLA’s Hollywood Diversity Report and NHMC entertainment advocacy fellow Alejandra Salazar, compiled film studio research from 2012 through 2017, which it said found that Paramount had the worst numbers when it came to hiring Latino actors, writers and directors.

The UCLA report also said Latinos only appeared in 2.7 percent of the speaking roles and writers and directors were practically non-existent.

“There is no question that longstanding exclusion of Latinos from movies has contributed to the current precarious situation for Latino civil rights. Paramount Pictures’ refusal to partner in addressing their deplorable performance on Latino inclusion is utterly inexplicable,” said Thomas A. Saenz, Chair of the National Latino Media Council and President and General Counsel of the Mexican American Legal Defense and Educational Fund.

NHMC also said it looked at the top 100 grossing films of last year, of which Paramount Pictures produced eight. The non-profit claims none of the eight films featured any Latino writers or a lead actor. One film featured a Spanish director. Only two films out of the eight included Latino actors billed within the top eight acting credits, per IMDbPro data. This totals out to just three actors of the 64 researched, and of these three, 1 is Chilean, 1 is Brazilian, and only 1 is a U.S.-born and/or immigrant Latino.

In a statement to top entertainment website Deadline Hollywood, Paramount Pictures said, “We recently met with NHMC in a good faith effort to see how we could partner as we further drive Paramount’s culture of diversity, inclusion and belonging. Under our new leadership team, we continue to make progress — including ensuring representation in front of and behind the camera in upcoming films such as Dora the Explorer, Instant Family, and Limited Partners — and welcome the opportunity to build and strengthen relationships with the Latinx creative community further.”

Grajeda who said his writing style is usually dark comedy with surreal themes also said, “I pride myself on being as original and creative as I possibly can, but studios rarely take risks. Especially with Latinos,” Grajeda said.

In spite of the data and the challenges he’s experienced he hasn’t given up.

“I’m still hoping that a studio more open to original ideas will hear my pitches, like Netflix or Hulu. In the meantime, I’ll keep writing my scripts that are what I love. Funny, weird, and creative.”

Natasha Galano, a Cuban-American Afro-Latina actress originally from Miami, has also found challenges in Hollywood, not in the movies, but in commercials and of all places in the Spanish market.

“I can tell you that from personal experience my heart breaks a little when I see a commercial breakdown for the Spanish market asking for “standard Spanish speaking” Latina from Mexico.

She said for her it means someone, “that has a Caucasian look or that speaks standard Spanish,” she said.

Galano started acting again last year after battling cancer for four years. She believes the Spanish market could itself to more to help open up doors to the mainstream hiring people from all cultures that make up the Latin-American community.

“We all have different looks and accents. All the “Aspirational” Latina women in commercials all look the same,” Galano adds.

“We have to open the American media’s eyes as to what other Latinos look like, too. I am a Cuban-American Afro-Latina, and I want to be represented because that means they’re thinking of me too.”