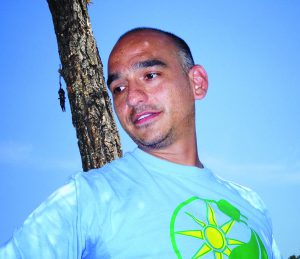 When Gustavo Valdez was looking for a job almost a year ago, he came across an opportunity that not only met his interests in working with underserved communities, but also offered the ability to take his efforts across the border into Mexico.

Now, almost a year since he decided to dedicate his work to helping communities in Mexico gain access to solar energy, Valdez shared with La Prensa San Diego that his love for GRID Alternatives San Diego comes from it meeting two components that he values, the ecological component that comes lowering the emissions of greenhouse gases and the social component that comes from helping underserved communities and individuals interested in solar careers.

“When I saw all the work that GRID does, and that they were looking for someone to do all that work in Mexico, I said to myself (the job posting) A just needs to say, ‘if your name is Gustavo Valdez please apply’”, Valdez said.

He recently finished a project in the Casa de la Esperanza orphanage and by the end of 2018 Valdez is hopeful they will have completed four projects in Mexico.

Providing solar panels to orphanages allows them to reduce or completely get rid of their energy bill thus allowing them to use those funds to offer children in their care better opportunities.
The projects also allows for the opportunity to educate students interested in a career in solar to gain work experience, such as students from universities in Tijuana.

Valdez said the projects gives volunteers experience and also allows them to make decisions on what interests in the solar field. He added that it also allows students to discover if their passion is installing panels or if they prefer to explore the options in design or different aspects of the career.

“They learn different things, they get out of their comfort zone, and they acquire experience that can only be gained through volunteering,” he said. “The roof becomes a classroom.”

Valdez said he feels he is in a place of work that supports his ideas and that is committed to standing in solidarity with the border, Mexico and mexicans on both sides of the border.

“I’ve found people who are very aware that the sun does not have a border,” Valdez said. “And that if we can be on this side of the border we can also be on the other side.”

Originally from Monterrey, Mexico, Valdez studied international relations and then a masters in ethics. He was a teacher in Mexico prior to moving to the United States.

He moved permanently to Saint Louis, Missouri, in 2013 and it was then that Valdez began to see the struggles Latinos faced.

Valdez discovered that members of the communities he worked with in Saint Louis did not know of social programs that were accessible to them. After Valdez began working with a movement intended to organize food workers, he saw that Latinos were often exploited, and he took a look at his experience and career and decided he needed to do something.

He set out to pursue work in the nonprofit world and gave himself time until he found, “a job that promotes something sustainable not only with Latinos but also in the U.S. and Mexico.”

Plans are continue their efforts in community in Tecate where there are community members who identify as Kumeyaay, and bring more homes and buildings solar energy – because many still do not have electricity.

He also added that in 2019, Valdez hopes to help install solar panels on the roofs of buildings of the Casa del Migrante shelter, a nonprofit in Tijuana that provides help to migrants who arrive to the city.

“From a point of environmental justice, I’ve discovered that underserved, vulnerable, and poor communities are the ones who are wronged,” Valdez said. He added that his work, “gives him the perfect ethical justification for advocating for a vulnerable group at the same time that I am advocating for the environmental, social, economic sustainability.”