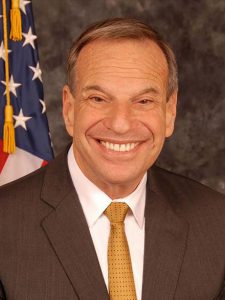 It’s been five years since San Diego endured the pain of a political scandal at City Hall that led to the resignation of one of our best known local politicians.

Bob Filner, a former Congressman and City Council member, had only been Mayor for eight months when he was accused of sexual harassment and inappropriate touching of women.

Several prominent Democrats held a press conference calling for Filner’s resignation after they spoke directly to some of the victims, hearing for themselves of the abusive behavior of someone long viewed as a community leader.

When Mayor Filner didn’t resign, a recall campaign was launched to gather enough voter signatures to force a special election. Seeing the writing on the wall, Filner agreed to resign.

Three months later, Filner pled guilty to one felony count of false imprisonment and two misdemeanor counts of battery, and signed a plea agreement that spared him from jail time, but he did serve three months of house arrest and three years of probation.

In the aftermath, the City ended up settling three lawsuits from Filner’s victims, costing taxpayers more than one million dollars.

Although many Democrats bemoaned the loss of a liberal in the Mayor’s office, very few could support Filner in the face of his actions that were antithetical to the core values of Progressives.

Filner reportedly moved to LA to recover from his very public humiliation.

That should have been the end of the sordid story of Bob Filner, but sometimes people just don’t know when enough is enough.
Three years after his colossal fall from grace, Filner returned to the political scene by releasing a book titled “Trumping Trump”, which ironically barely even mentioned the Donald.

Instead, Filner pontificated on how Progressives could recapture political power. To his credit, Filner did also acknowledge his sexual addictions and recognized how he used his power to fulfill his seemingly insatiable quest for women.

Although his book received some positive reviews for its insight into politics, some critics still could not see past the damage Filner had done to the progressive movement through his flagrant disregard for women, equality being one of the pillars of liberal theory.

Filner and his fans always retold the story of a college-aged Bob Filner that joined the Freedom Riders in Mississippi during the civil rights struggles of the 1960s. Over the years, his having met Martin Luther King, Jr. served as bonafides that gave him instant and almost mythical credibility with Democrats.

Bob Filner was first elected to the San Diego Unified School District board, then the City Council, then to the United States House of Representatives. During his 20 years in Congress, Filner fought for better services for veterans, including Filipinos that had served this country. An old school liberal, Filner wielded great power within the Democrat establishment.

His election as Mayor in 2012 was hailed as a victory for Progressives in San Diego after 20 years of Republican mayors leading one of America’s largest cities. Democrats savored the win and planned on implementing new city policies on the environment, labor, community planning, and even city contracting. And all the while, Filner smiled ear-to-ear with a grin that many likened to Batman’s nemesis, the Joker.

For years, rumors of Filner’s womanizing and wandering hands circled among the political class of San Diego and Washington. Some people just called it boorish, and others reluctantly went along to get along. No one wanted to confront a powerful congressman with a well-known penchant for retaliating against political enemies, and a long memory to boot.

In politics, it’s never too long before Karma rears its head and bites someone where it hurts.

Within eight months of his election as Mayor, Filner hit the wall. Some Democrats that had long been close to him held a press conference and demanded his resignation. Filner and his supporters called it a witch hunt and a coup d’etat, but, it was not enough to save him.

Even before the #metoo movement and Harney Weinstein, Bob Filner became the poster boy for harassment of women. It wasn’t only employees Filner harassed, but just about any woman he came near, even female members of Congress. Filner abused his positions of power to intimidate and coercive countless women, young and old alike, in ways that he could never had done without the color of authority.

When he finally resigned, Filner still defended his actions. He claimed he was denied proper legal representation by the City. He claimed he never sexual harassed employees under the definition of the law. And he claimed it was just the old guard of San Diego that wanted him out of office.

In an interview with the Voice of San Diego in January 2016, Filner refused to discuss the details of the allegations against him, saying he would talk when the legal cases were over. Now, more than two years later, Filner still has not publicly apologized and made amends for his transgressions.

Filner didn’t just harass women and cause great emotional distress, but he also let down his party and his supporters. For four decades, people had believed in Filner to promote the values that mattered to them; civil rights, equality, and compassion. Supporters voted for him, donated money, and volunteered for his campaigns.

Through his actions, though, he betrayed everyone he claimed to care about.

This week, Filner was back in the public space doing a podcast interview where he talked about his 1960s work in civil rights, his defense of progressive issues, and his experience in politics. He was referred to as a “hero” to many and asked to come back to the political arena. Understandably, he’s still proud of this track record.

But, what he failed to do was even acknowledge the damage that he has done to women and his closest friends that can’t be overlooked simply because of his politics.

The cause for social justice and progressive ideals will continue. New leaders have emerged to take up the mantle of change for a new generation. Our perspectives were recalibrated by the #metoo movement to ensure that everyone is treated equally at work, at home, and in politics.

Al Franken, a far more influential figure in politics, resigned from the US Senate for far less offensive behavior and has remained off of the public stage, and politics have continued on without him. Although some Democrats lamented his sudden departure, the Party recognized that it could not continue to advocate for equality while condoning inappropriate behavior by one of its leaders.

Bob Filner, too, has paid the political price for his actions. He resigned in disgrace. He served his time in home confinement and probation. That’s appropriate.

But the political battlefield for Democrats and Progressives is better off without Filner now. His baggage is too great a burden to carry when advocating for the very rights he himself violated. Now, only his ego would benefit from his re-emergence in politics.

The time has come for Filner to stay retired.